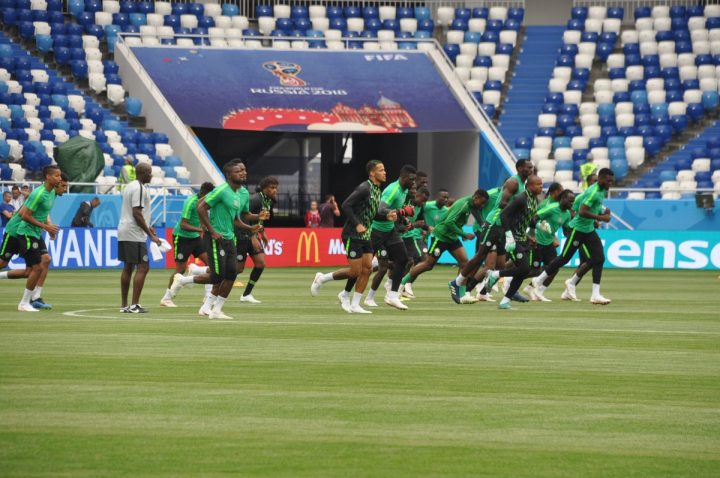 Super Eagles’ head coach Gernot Rohr and captain Mikel Obi say the team is capable of delivering on its promise on Saturday against Vatreni of Croatia.

The Nigerian side will face Croatia at the Kaliningrad Stadium in their opening Group D match at the FIFA World Cup, needing to win for a bright start.

This will be against the backdrop of disappointing opening match losses by fellow African sides Egypt and Morocco on Friday.

Egypt had lost their opening Group A match at Ekaterinburg 0-1 to Uruguay, after an 89th-minute goal by Jose Gimenez.

Morocco followed in their trail hours later with a 0-1 loss to Iran at St. Petersburg in Group B, falling to an own goal in added time by Aziz Bouhaddouz.

Rohr, who earlier in the day had addressed the media before the team’s training session, said he was sure that his team was in shape to get a good result.

“We know the importance of getting a good result. It is important that we set out well, and we have been doing our best to be in good condition, just like I said earlier today.

“Now that we are here and close to the hour, the players are in the right mood and ready for Croatia. We will do what is necessary,’’ he said.

Rohr assured that injuries were not the team’s worries at the moment, but how to get it right during the game.

“What we need to worry about is how to get our tactics right, and I am confident that we have done all that is necessary in this regard,’’ he added.

Team Captain Mikel Obi equally assured that his teammates were ready and raring to go against the Croats.

“As a team, we have done all that is needed, training and getting fit. We the players are also ready to do the job on the pitch as expected.

“I can assure Nigerians and all our other fans worldwide that we will do our best and ensure we do not disappoint them,’’ he said.

NAN reports that Africa’s two other representatives at the 2018 World Cup — Tunisia and Senegal — will join the fray on Monday and Tuesday respectively.

Tunisia takes on England at Volgograd in Group G, while Senegal faces Poland in Group H at the Spartak Stadium in Moscow.