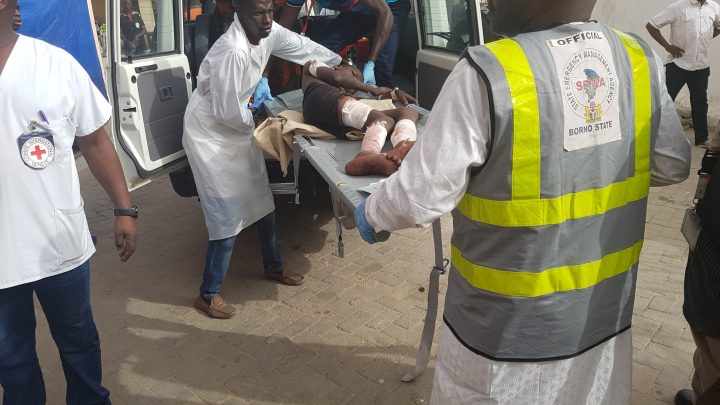 No fewer than 32 persons were killed,  while 84 others were injured when six suicide bombers detonated Improvised Explosive Devices(IEDs), in Damboa local government area in Borno state on Saturday.
The News Agency of Nigeria (NAN), reports that some locals alleged that the deaths arose from a  misfiring by the Nigerian Army’s artillery but the army denied the claim.
Malam Buba Shettima, a witness said that two separate bomb blasts occurred in Shuwari and Abbachari, at about 8:30 p.m.
“The whole of Damboa was shaken by the unfortunate incident. We all scampered for safety as the blasts were coming from different directions. There were bodies everywhere.
“We suspected that the many deaths recorded were a result of the military artillery,” he said.
Mohammed Hassan, another local from the area who corroborated the claim, said: “At about 8:30 pm of on Saturday night,  an attack suspected to be from an artillery killed 31 innocent people in Damboa Shehuri and Abachari. The attacks came from two separate directions. My house was among some of the houses destroyed,” he said.
Maj.-Gen. Rogers Nicholas, commander of Operation Lafiya Dole, denied the claim, saying the killings were caused by suicide attacks and not military artillery.
“There was nothing like an attack from the military artillery. You can see the pictures of six female bombers who detonated their explosives and as a result, 20 persons were killed while others were injured,” he said.
Rogers urged people to disregard the claim that people were killed by the military and not by suicide bombers.
Modu-Zannah Maina, The District Head of Damboa, who described the incident as “shocking and disturbing” said the attack was perpetrated by female suicide bombers.
Maina lamented that a lot of people that were affected were mostly children adding that many victims were injured.
“We are here in this hospital to check our people affected by Saturday’s bomb blasts. So far, the victims have been responding to treatment,” he said.
Meanwhile, Demian Chukwu, the Borno Commissioner of Police, said “On Saturday, at about 2045hrs, an explosion occurred at Abachari area, in the outskirt of Damboa L.G.A. of Borno State.
“At the sound of the explosion, personnel of the Nigeria Police and Members of the civilian JTF mobilised to the scene and discovered twenty dead bodies and 48 injured persons in a suspected terrorist attack.
“The wounded and the dead were evacuated to a hospital while the scene was sanitised by a deployment of police EOD unit.
“Investigation is ongoing to unravel the nature of the attack,” he said.
Hajiya Yabawa Kolo, the Chairperson of the State Emergency Management Agency (SEMA), who also confirmed the incident, said the agency had deployed its personnel to evacuate wounded persons to the hospital for quick medical attention.
“Our team has been deployed to render life-saving support to the victims of the blast. As you can see,  they have been tirelessly working with ICRC since morning to evacuate the injured from the airport to the hospital.
“We are all saddened by the unfortunate incident that occurred in Damboa,” said Kolo.
(Source: NAN)