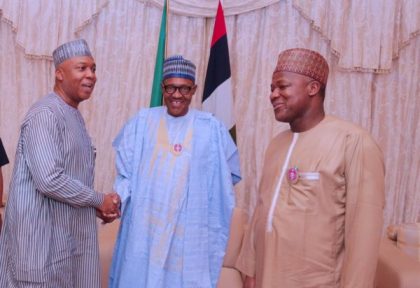 President Muhammadu Buhari on Wednesday met with Senate President Bukola Saraki and the Speaker of the House of Representatives Yakubu Dogara to review the circumstances surrounding the renewed killings in Plateau.

Speaking to State House correspondents after the meeting, held behind closed doors at the official residence of the President, Dogara expressed satisfaction with the measures so far put in place by Buhari to manage the situation and ensure sustainable peace in the state.

He said that the President briefed them on his plans to reorganize state security apparatus with a view to forestalling a repeat of the killings on the Plateau.

“We are here to condole with  Mr. President, the government and people of Plateau state over this very unfortunate incident.

“He has briefed us on what he saw firsthand when he visited Plateau yesterday, and measures he is putting in place to ensure that we do not have a relapse.
“These are very sober moments for all of us in a situation where people in hundreds are killed; we can no longer tolerate this kind of situation as a government.
“Whatever it is we must not lose the fight against violence because we can’t lose that fight and still keep our civilization.
“If you go to the Northeast you will see the level of devastation caused by Boko Haram; everything resembling progress – from schools to hospitals to government institutions – everything has been pulled down.
“And we don’t want a replication of this all over the country.
“The President has taken enough steps; these are security issues; they are not matters that you should discuss (here).
“But he has told us what he is doing – the reorganization that he plans to put in place to ensure that this does not happen (again).”

Also speaking on the outcome of the meeting, Saraki said that they were briefed by the President on the unfortunate events in Plateau state.

He said that the National Assembly would continue to work closely with the executive arm to tackle insecurity in the state and other parts of the country.

“Of course like any father of the nation, he expressed dismay at such a terrible situation and said that steps are being taken to restore sanity and to restore confidence to the nation.

“This is of great concern to him and to all of us.

“We will continue to all work towards the restoration of law and order in the state because nobody is happy with it.

“We will ensure that we work collectively to see that we restore sanity and of course commiserate with all the families affected by the crisis.

“This is our intention,’’ he said.

President Buhari had on Tuesday visited Jos, where he directed the chiefs of security agencies in the country to remain vigilant and to ensure that the lives and property of Nigerians were protected.

Buhari, who was in Plateau to condole with the government and people of the state over the renewed killings in the area, held interactive sessions with traditional rulers, community and religious leaders, representatives of youth and women groups as well as security chiefs. (NAN)