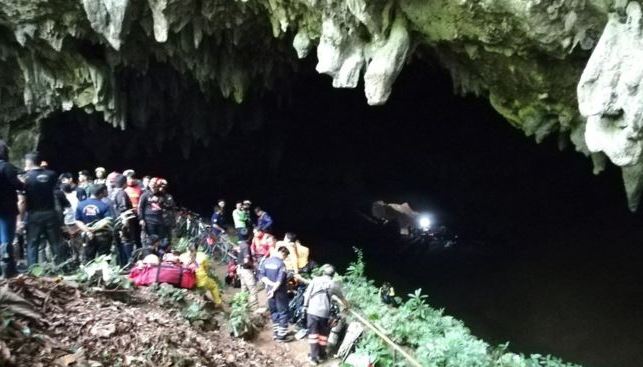 Rescuers are racing against time to rescue a teenage football team that has been trapped in a cave in northern Thailand for nearly two weeks, officials said Thursday.

“What we’re worried about most is the weather. If it rains again, our efforts might experience a setback like what happened before,” Narongsak Osottanakorn, commander of the search and rescue mission, told newsmen.

A dive search operation had to be suspended last week for a few days due to heavy rains that flooded the entire cave.

“We’re waiting for a weather assessment from the meteorological department and a physical assessment of the boys from the SEAL unit, and then we’ll go from there,” Narongsak said.

A weather forecast from Thailand’s meteorological department on Thursday indicated a possibility of heavy rain later in the day that could continue for five more days.

“If our assessment determines there is a 90-per-cent chance of safety [bringing the boys out with divers], and 10-per-cent risk, we might still go for it,” said Narongsak.

Thailand is in the middle of the rainy season. A flash flood blocked the main cave exit when the group – a dozen boys aged 11 to 16 and their 25-year-old coach – visited the cave on June 23.

Their discovery brought an outpouring of joy and relief not only to their families but also throughout Thailand and around the world.

It remains unclear when the group will be taken out of the cave as the flood level remains too high – and the
conditions too unstable – for them to dive safely.

“That’s why we’re draining the flood around the clock,” said Bancha Duriyapan, an army general overseeing the rescue efforts.

According to Bancha, some 1.6 million litres of water is being drained out per hour, and the water level in the cave has subsided by more than one cm an hour.

Bancha said water underneath the cave continues to seep through holes in the cave’s limestone, even as it’s being pumped out elsewhere.

Two options are being considered to extract the boys from the cave.

The boys can dive out of the cave with the assistance of divers, or rescuers can find an alternative opening, perhaps by drilling a hole in the cave’s roof, and airlift them out.

It is located 1,000 km north of Bangkok near the Thai border with Myanmar.