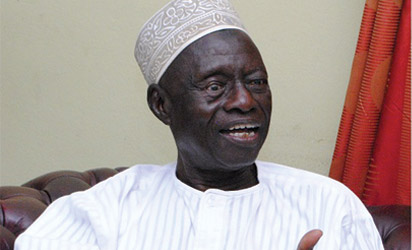 Turaki Hassan, Abuja: Speaker of the House of Representatives, Hon. Yakubu Dogara has expressed sadness over the demise of foremost elder statesman, Malam Adamu Ciroma who died at the age of 84 whom he described as “epitome of integrity”

The Speaker noted that the late elder statesman was an “icon of transparency and an epitome of integrity who lived an incorruptible life.”

The Speaker, in a statement, described the late Malam Adamu Ciroma as one of the nation’s shining stars and a frontline states man who demonstrated passion for the unity, progress and development of Nigeria.

“Indeed we lost a great man, a patriot, leader par excellence and a shining star. Malam Adamu Ciroma was one of the few surviving close associates of the late Prime Minister, Sir Abubakar Tafawa Balewa and the late Premier of Northern Nigeria, Sir Ahmadu Bello and he remained a consistent advocate for the struggle to see Nigeria achieve the dreams of her founding fathers”.

“He was an intellectual genius and highly cosmopolitan public servant who exhibited high sense of patriotism, passion and enthusiasm for the progress and development of the country while serving as first indigenous Editor and Managing Director of New Nigerian Newspaper, CBN Governor and Minister of various portfolios in different administrations in Nigeria.

“He was indeed a rare Nigerian, accomplished administrator, uncommon patriot and distinguished elder statesman, who lived an eventful, exemplary and accomplished life worthy of emulation”.

“On behalf of the entire membership of the House of Representatives, I wish to extend our heartfelt condolences to the bereaved family, the government and people of Yobe state as well as to his associates and admirers all over the country on this great loss of an illustrious son”.