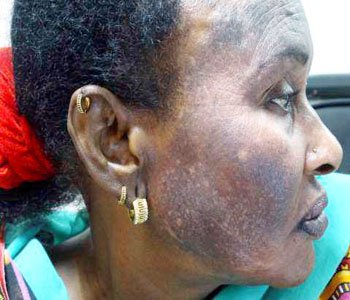 A medical practitioner, Dr Ayopo Adeyemi, has advised Nigerians to desist from applying bleaching creams on their skins, saying such could have negative effects on their health.

Adeyemi told the News Agency of Nigeria (NAN) on Monday in Lagos that bleaching could cause skin cancer to such individuals.

He said that it could also expose the endothelial cells of their skins to wear and tear.

The endothelial cells form a one-cell-thick walled layer called endothelium that lines all their blood vessels such as arteries, arterioles, venules, veins and capillaries.

According to her, some other dangers associated with skin bleaching include burning or redness; skin diseases; liver and kidney damages among others.

“Bleaching of the skin is dangerous because it always has various adverse effects on the health of those doing it.

“We must stop using creams with dangerous chemicals and go for moisturisers instead,” she said.

Adeyemi said that suturing a bleached skin after an accident was always difficult as such would continue to break down if it could be sutured initially.

She said that most people were fond of applying creams that contain harmful chemicals on the body with a view to looking more beautiful and attractive.

She advised people to always maintain their natural complexion to guard against the skins being overstretched.

Adeyemi said that when skins were overstretched, they could pose some health challenges to such individuals indulging in such act.

“You can be impairing your skin’s ability to heal fast when suffering from an injury, and it may lead to a very big infection which will take a very long time to heal and become normal.

“Please, avoid it because it weakens the ability of your wound to heal, it is best to maintain your natural skin complexion,” she said. (NAN)