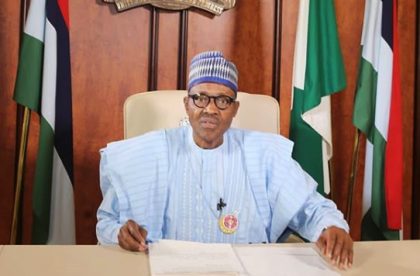 President Muhammadu Buhari has congratulated the management and shareholders of the Nigerian Liquefied Natural Gas company (NLNG) on the signing of the contracts for the Front End Engineering Design (FFED) of Train 7 of the NLNG Project.

The President’s congratulatory message was contained in a statement by his Senior Special Assistant on Media and Publicity, Malam Garba Shehu, in Abuja on Wednesday.

The President also congratulated the NNPC and its Joint Venture partners, Shell, Total and AGIP, on the signing of the FFED contracts.

He also welcomed the signing of an MOU between NLNG, “B7 JV Consortium” and “SCD JV Consortium,” on Wednesday in London.

President Buhari also acknowledged the commitment of all parties in supporting his administration to launch the “gas revolution” in Nigeria by ensuring the realisation of Train 7, which had been stalled for many years under previous administrations.

He expressed optimism that this significant step would culminate in a Final Investment Decision (FID) for the much-awaited multi-billion dollar Train 7 expansion programme by the end of this year.

The President noted that the signing of the contract for the plant expansion project after an eight-year delay was a sign of irreversible commitment by the Joint Venture to enter the FID stage.

According to him, this is a clear indication of the return of confidence of investors in Nigeria following the good governance practices instituted by his administration.

He also noted that the 7th train which was expected to provide “some 8,000 jobs is not only important for the country but also an important benchmark for the Niger Delta region, which rightly yearns for development projects.’’

The President recalled with nostalgia that several signature projects, launched under his watch, which would have accelerated the growth of Nigeria’s economy, including the NLNG, had sadly suffered neglect and abandonment by succeeding administrations.

President Buhari, who was a former Federal Commissioner for Petroleum and Natural Resources, observed that the NLNG had the goal of establishing 12 trains by early 1980s but the growth of the project was stunted.

He said so far, only six of those trains have been inaugurated.

The President, however, noted that with the signature project back on the cards, “it is destined for his administration to complete the project.

“This project perfectly keys into the Federal Government’s ‘Economic Recovery and Growth’ agenda.

“It signifies foreign investors’ confidence in our country’s economy.” (NAN)