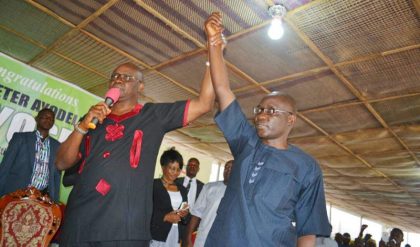 The card reader machine at Ofafuru Polling Unit 002, Ward ‎002 in Ikere-Ekiti on Saturday rejected the voter card of  Prof. Kolapo Olusola, the PDP candidate in the governorship election.

The News Agency of Nigeria(NAN), however,  reports that the machine did not reject the card of that of his wife, Janet.

Olusola had arrived at the polling unit at exactly 9.15 am to be accredited and vote, an election process which could not hold for him after about 20  minutes.

Although his wife eventually voted, the PDP flagbearer could not and he had to leave to allow others to exercise their civic responsibility.

Speaking on the sidelines of the incident, Olusola said he was disappointed with the type of card reader deployed for the exercise by the Independent National Electoral Commission(INEC).

” I got to my polling unit early today to cast my vote and to my surprise, the INEC card reader rejected my card.

” I was standing in front of the INEC presiding officer for about 20 minutes while they were ‎busy battling with a card reader.

” If I do not cast my vote, it does not mean I am not ready to vote but ‎the INEC card reader did not accredit my card which automatically nullifies me from exercising my civic right.

” Four years ago, it was the same voter card that I used to cast my vote and the card reader did not reject it.

” I will officially report my experience to the REC  and I believe appropriate actions will be taken,” he said. (NAN)