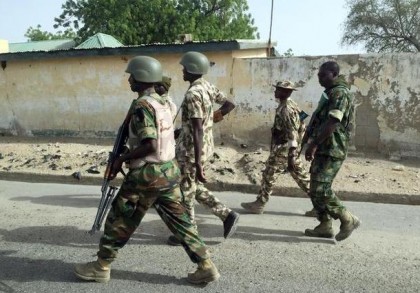 The Army said on Monday it neutralised 22 suspected terrorists in Bama Local Government Area of Borno, while several others escaped with gunshot wounds after troops repelled an attack.

The army spokesman, Brig.-Gen. Texas Chukwu, who disclosed this in a statement, however, denied a report that the terrorists attacked, killed soldiers and carted away some military vehicles.

Chukwu said the report was “not only untrue but misleading and blown out of proportion”.

He admitted that there was an attempted attack on troops at Kwakwa and Chingori communities in Bama area by suspected terrorists due to difficult terrain where troops “vehicles bogged down”.

“The terrorists also attempted to cart away troops operational vehicles but were successfully repelled by our gallant troops with the support of the Nigerian Air Force.

“Unfortunately, one officer and a soldier sustained injuries and are currently receiving medical attention at the military medical facility,” he said.

Chukwu urged residents of the North East to disregard the report as their safety was guaranteed. (NAN)