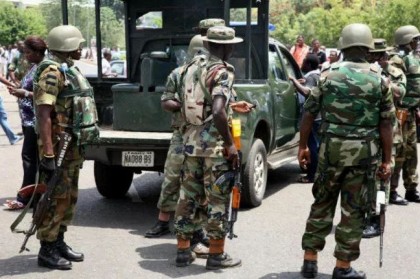 Nigerian Army on Monday dismissed as misleading reports of alleged missing of soldiers and military vehicles in an attack coordinated by Boko Haram insurgents in Borno.

Brig. Gen. Texas Chukwu, the Director, Army Public Relations, made the clarifications in a statement issued in Maiduguri.

Chukwu dismissed the report as “untrue, misleading”, and called on the people to disregard the report.

Chukwu said that “the Nigerian Army wishes to state categorically that the report is not only untrue but misleading as the said report is blown out of proportion by the media.

“Contrary to the report, the Nigerian Army wishes to put the record straight on the issue and assure members of the public particularly residents of the North East to disregard the report as their safety is guaranteed.

“The Nigeria Army wishes to state that there was an attempted attack on troops at Kwakwa and Chingori communities in Bama area of Borno State by suspected Boko Haram terrorists as a result of difficult terrain where our vehicles bogged down.

“The terrorists also attempted to cart away troops operational vehicles, but were successfully repelled by our gallant troops with the support of the Nigerian Air Force”.

Chukwu disclosed that the troops killed 22 insurgents while several others escaped with gunshot wounds in the attack, adding that efforts were being intensified by the troops to get the fleeing terrorists.

The army spokesman added that one officer and a soldier, who sustained injuries in the attack, were receiving medical attention at a military medical facility.

Chukwu tasked the media to verify facts in their reportage, noting that “certain facts must be reported with caution particularly now that numerous successes have been recorded by the troops in the fight against the insurgency”.

While calling on the people to go about their normal businesses, Chukwu, stressed that the Nigerian Army was on top of the situation. (NAN)