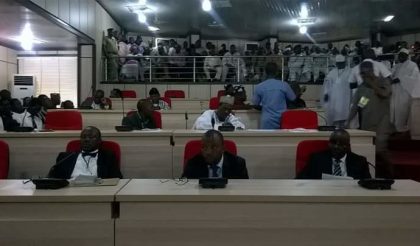 A section of the Benue House of Assembly, who endorsed the impeachment motion against Gov. Samuel Ortom, on Monday in Makurdi said he would be served impeachment notice within seven days.

The News Agency of Nigeria (NAN) reports that 19 of the 30 legislators in the state assembly, had on July 24, impeached Speaker, Terkimbi Ikyange, for what they termed “highhandedness”.

However, in a swift reaction, Mr Terkimbi Ikyange, had described his impeachment as an act of illegality and said the impeachment did not follow due process since the House was on recess.

Addressing journalists on the outcome of their plenary on Monday, Ikyange said 10 of the legislators had met during plenary and agreed to commence impeachment process against the governor for gross financial misconduct.

He disclosed that the lawmakers were angered by the misappropriation of N54 billion from the state’s coffers.

According to him, the figure represents N22 billion embezzled from the security vote, while N32 billion is from local government funds.

He also said the lawmakers were not happy with the governor for owing workers in the state.

NAN reports that the identity of the members has not been known since journalists were not allowed access into the assembly complex.

NAN also reports that workers in the state are owed upwards of 13 months, while for some categories, it was 8 months.

Meanwhile, the legislators loyal to the governor, who have shifted their venue from the assembly complex to the Old Banquet Hall of the Benue, Government House, described the impeachment motion as illegal.

In his motion dismissing the impeachment motion, Majority Leader of the House, Mr Avine Agbum, said the presiding officer of the session (Ikyange) had been suspended by them.

He also said the members had not met the quorum to meet and moved for the suspension all members who attended the session.

The two legislative groups claim to be using the official Mace, the stamp of legislative authority.
(NAN)

NEWER POSTDisney to Give Africa Its Own Fairytale “Sade” with Nigerian Producer
OLDER POSTKano Assembly Impeaches Speaker, Replaces Him With Ex-Speaker