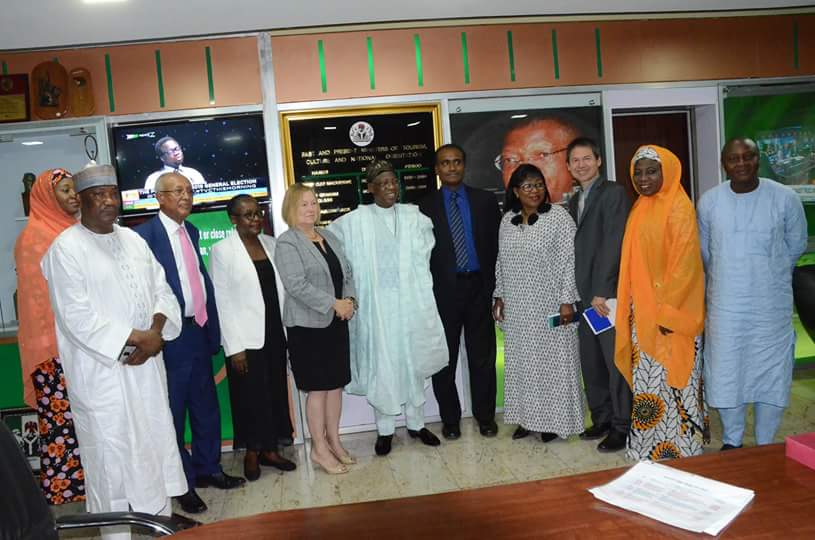 Segun Adeyemi, Abuja: The Minister of Information and Culture, Alhaji Lai Mohammed, has urged the Voice of America (VOA) to partner with the Nigerian government to fight the menace of fake news and to correct the misrepresentations of events in Nigeria.

The Minister made the call in Abuja on Tuesday when VOA Director Amanda Bennet paid him a courtesy visit in his office.

“The VOA, an international broadcaster with great credibility and wide listenership, especially here in Nigeria, can do a lot to help correct the misrepresentations, especially over the farmers herders clashes. Your credible reports can also go a long way in tackling the menace of fake news,” he said.

Alhaji Mohammed said the Federal Government has recently launched a national campaign against fake news, aimed at sensitizing Nigerians to the dangers posed by fake news, adding: ”It is a clear and present danger, not just to our democracy, but to national peace and security.

“We are using all the information dissemination tools at our disposal as well as collaboration with relevant groups to push the campaign.”

The Minister said contrary to the misrepresentation of the farmers-herders’ clashes as an ethno-religious crisis, it is driven largely by the contest for dwindling natural resources like land and water, due to the effect of climate change, as well as demographic pressure occasioned by the country’s burgeoning population.

“Nigeria’s population was 45 million at independence in 1960. Today it is almost 190 million. Yet, if anything, the country’s natural resources like land water have shrunk. The shrinking of Lake Chad has not helped matters. From 25,000 sq km in 1963, it is now 2,500 sq km. The 35m people from several countries that depended on it for livelihood have moved elsewhere. At the Nigerian end, many have moved south, thus triggering hotter contest for land and water,” he said.

Alhaji Mohammed also said those seeking to downplay the Administration’s success against Boko Haram are not looking at the fight in the proper context.

“Some query Nigeria’s assertion that it has decimated Boko Haram without understanding the context in which that was said. When President Muhammadu Buhari was being sworn into office 29 May 2015, a territory three times the size of Lebanon was firmly in the hands of Boko Haram, which collected taxes, removed and installed emir and hoisted its flag. Today, not one inch of our territory is in the hands of Boko Haram,” he said.

Responding, Ms. Bennet, who is making her first visit to Nigeria, said the country is VOA’s largest partner country, having the largest group of VOA listeners and viewers in Africa.

She said the VOA, with 240 million viewers and listeners worldwide, plans to expand its presence in Nigeria by possibly adding more language broadcasts, in addition to broadcasting round the clock.