The Wife of Imo Governor, Mrs Nkechi Okorocha, has described women as instruments for national transformation considering their roles as home builders and agents of positive change. 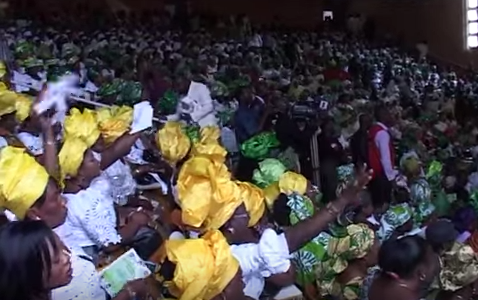 Okorocha said this while briefing newsmen on the activities lined up for the forth coming 2018 Imo Women August meeting held in Owerri on Tuesday.

He promised to empower Imo women with bus, shops and gift awards as her parting gifts to mark this year’s Imo women annual August Meeting.

She said that Imo women August Meeting had become a phenomenal annual ceremony where women gathered in their respective villages, communities, town halls and religious houses to deliberate on development issues.

She said they also brainstormed and p00l resources together for the welfare and upliftment of the society.

“The August meeting in Igbo land, particularly in Imo State, has shown that if women are organised, they can be consistent in piloting and championing developmental projects in communities.

“We have realised the potential embedded in Imo August Meeting, especially from the angle of women empowerment, family consolidation and unity as well as the community development and have revolutionised it into a historic event.

“We have introduced events like arts and culture, agricultural products and food exhibition, thereby enhancing the discovery of talents and potential in women in view of their roles as home builders and agents of positive change.

“We have by the the grace of God expanded the scope of August Meeting and turned it into an all inclusive harvest where every woman benefit socially, educationally, politically, and spiritually,” she said.

Okorocha observed that some of the women in politics of Imo today were discovered during the August Meeting.

As her last August Meeting as the Imo First Lady, Okorocha chronicled some of the past themes of the annual event since 2011 to include “Women: The Home builder”, “Women: The Vessels for Transformation”, “Women Building Bridges of Friendship Across the Niger” and “Managing Stress and Unity of Purpose.”

She said that this year’s theme, “Sharing our Common Cultural Values”, called to mind that culture is a way of life and the need to hold tenaciously “our cultural heritage and not allow it go extinct.”

She identified some the culture to include Igbo Langauge, folklore, myths, food, dance and mode of dressing, saying they were being substituted for other people’s culture.

Okorocha highlighted some of the programmes lined for the event to include praise and worship, match past, cultural dance for the aged, Oso Mmiri (water race), agricultural products/ food exhibition, tying of head ties/knotting of ties and a raffle draw.

She said a bus, “Super mum Shop” would be given to women that excelled with earlier empowerment of her pet project “She Needs a Roof Programme (SNARP)”, while all the women in attendance would be given gifts items ranging from motorcycles, deep freezers, generating sets, mattresses, TV and others. (NAN)