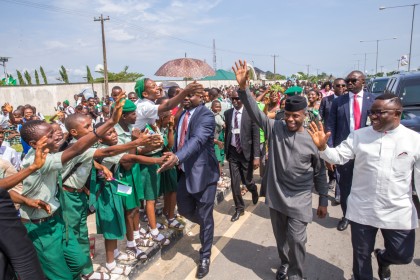 Acting President, Yemi Osinbajo has described the current political happenings in Nigeria as a battle between the good and bad elements whose aim was to continue suffocating the nation by milking it dry.
He said that the Federal Government “would not compromise” in the ongoing war against corruption and protection of national interest.
Osibanjo made the declaration in Daura on Thursday while addressing thousands of APC loyalists at a campaign rally for Saturday’s Katsina north senatorial district bye-election.
He reeled out the achievements of the administration focused on transforming the nation infrastructure like roads, rail lines, agriculture, education, health, security and the fight against corruption.
“We will not relent,” he said, adding that no amount of blackmail will stop the government.
He used the occasion to call on the electorate in Daura north senatorial district to vote for the APC, noting that the election was necessitated by the death of the senator for the area, late Mustafa Bukar.
Earlier, Katsina state governor, Aminu Masari described the current face-off in Nigeria’s Senate as unfortunate, uncalled for and saddening.
He called on Nigerians of every divide to continue to support the transformation agenda of President Muhammadu Buhari, stressing that “this country must be reformed to the right path of progress and prosperity.”
Also, Kano State Governor, Abdullahi Ganduje who spoke on behalf of the Northwest governors, described the bye-election as testing ground preparatory to the 2019 general elections and called on the electorate to use their votes wisely.
APC National Chairman, Mr Adams Oshimhole called on the electorate to vote for the APC and shun the alleged financial inducement by the PDP candidate.
He described president Buhari as honest, gentle and one of the most decent Nigerian leaders ever produced.
He said Nigeria would in the nearer future be bailed out of poverty, crimes and insecurity whose seed was laid by the 16 years of the PDP misrule in the country. (NAN)

NEWER POSTI am Not Running For Any Office In 2019 – Lai Mohammed
OLDER POSTFG Offers N90bn Worth Of Bonds On Aug. 15