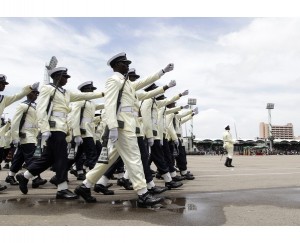 The Minister of Defence, Brig.-Gen. Mansur Dan-Ali, on Monday, said the Federal Government would continue to strengthen the Nigerian Navy to defend her strategic off-shore oil installations.

Dan-Ali gave the assurance on Monday in Lagos while inaugurating 16 patrol vessels, which would be deployed to patrol and police key oil installations within the nation’s maritime domain.

The minister said that activities of sea robbers had exposed Nigeria to be challenged by multi-faceted threats from continental and maritime fronts.

He added that criminalities like piracy, sea robbery and attack on strategic oil installations had complicated the nation’s maritime security environment.

Dan-Ali gave assurance that the Federal Government would rise up to curbing these criminalities capable of affecting the overall wellbeing of the nation.

‘‘For a littoral state with a huge dependence on her offshore resources, maritime security is vital to the nation’s wellbeing.

‘‘Against this background of threats, the entire nation will invariably be at a risky situation if we do not insist on a motivated and virile navy like ours,’’ he said.

Speaking, the Chief of Naval Staff (CNS), Vice-Adm. Ibok-Ete Ibas, said that navy, as the primary element of the nation’s maritime power, had the challenging task of safeguarding the country’s maritime interests.

Ibas said that the navy would continue to maintain an environment conducive for the unhindered conduct of shipping, fishing and offshore exploration and other maritime interests.

The CNS said that his officers and men would continue to maintain their presence at sea to promote the nation’s economic growth and development.

He said the navy was adequately positioned to provide round the clock protection for sea-based critical national assets and also ensure the security of the country’s sea-lanes.

‘‘The oceans have become the primary conducts of international trade and are central to the global economy.

‘‘The oceans and seabed are increasingly looked upon today as resource providers and critical contributors to national growth and prosperity.

‘‘For Nigeria, her geo-strategical position as a littoral state confers on her the advantage of exploring the sea and its resources for national development,’’ Ibas said.

He said the threats by sea robbers pose a huge challenge that negates the vast potential of the nation’s maritime domain and the Gulf of Guinea Region in supporting the prosperity and well-being of states and their people.

The News Agency of Nigeria (NAN) reports that the inauguration was to further fortify the presence of the Nigerian Navy around the Gulf of Guinea.

It will also curb the activities of sea robbers and pirates’ attacks on key installations and merchant vessels plying the West sub-region.