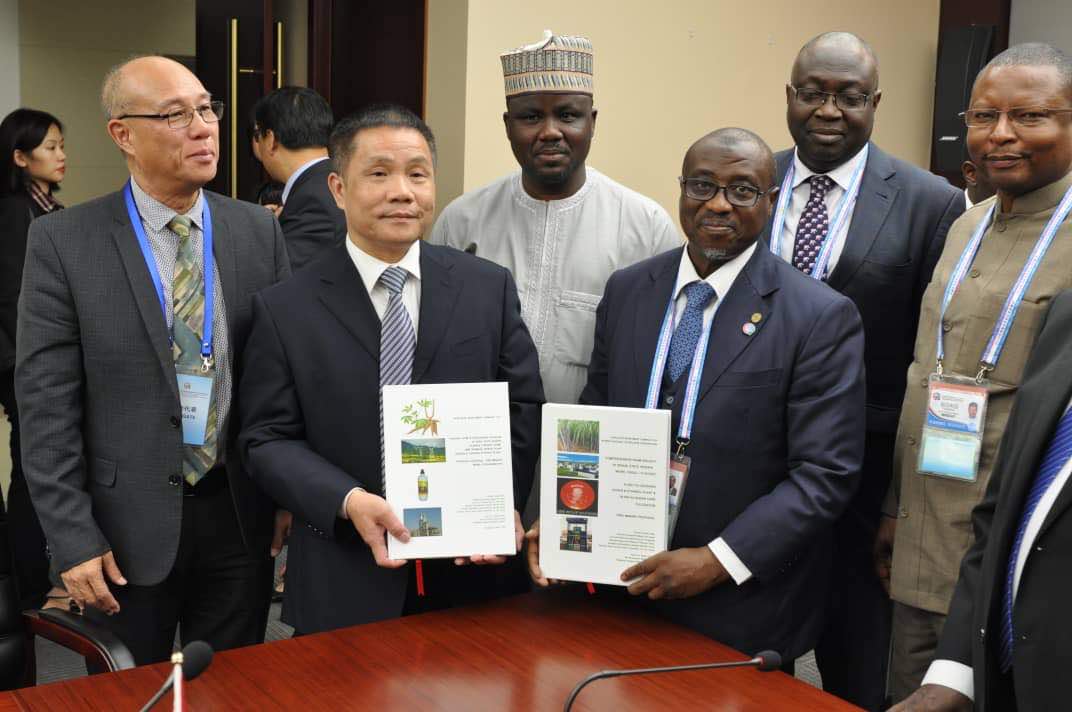 The Nigerian National Petroleum Corporation (NNPC) has signed a Memorandum of Understanding (MoU) in China with Nigerian-Chinese consortia towards developing sustainable biofuels in the country.

In a ceremony held at the Nigerian Embassy in Beijing on the sidelines of the ongoing Forum for China-Africa Cooperation (FOCAC) Summit Tuesday, two separate MoUs on the biofuels project development were signed between: NNPC and the OBAX-COMPLANT Consortium on one hand and NNPC and the CAPEGATE-NANNING Consortium on the other hand.

“The aspiration for the exploitation of renewable fuel resources in Nigeria is to implement our nationally determined contributions to the Paris Agreement; part of which requires the blending of 10% by volume of fuel-ethanol in gasoline and 20% by volume of biodiesel in automotive gas oil (diesel) for use in the transportation sector,” Baru stated.

He added that for a country like Nigeria with a daily consumption of over 65million litres of automotive fuels, it was easy to see that enormous volumes of fuel-ethanol and biodiesel would be needed to meet this obligation.

According to the GMD, meeting and sustaining the target requires strategic investment in more than ten (10) large biofuels complexes across the country.

Baru, who noted that the execution of the two MoUs would help develop the ﬁrst biofuel production complex in Nigeria, revealed that before the end of the year, the development of not less than three other complexes would commence in the country.

He said NNPC was poised to domesticating the alternative fuels production towards a thriving commercial Biofuels Industry which would not only create jobs and rural wealth for the populace but would also complement international efforts towards curbing global warming.

He described the renewable energy project as dear to the Muhammadu Buhari administration, saying that was why, shortly after assuming office as GMD, he made it one of the cardinal programmes of his corporate vision of 12 Business Focus Areas (BUFA).

Dr. Baru said as part of NNPC’s expanded programme on providing renewable energy solutions, the corporation also plans to power all its retail outlets by means of Solar PV facilities, as well as develop grid and off-grid solar power as a business and contribution to the clean fuels initiative of the Federal Government.

While assuring the two consortia that Nigeria’s investment climate under President Buhari was transparent and conducive to willing Investors, Dr. Baru charged them to commence the implementation of the biofuels projects without any further delay as preliminary studies on the programme show clear ﬁnancial indices that are very encouraging for business growth.

While OBAX and CAPEGATE are two Nigerian companies, COMPLANT and NANNING are two reputable companies incorporated in China.

Speaking on behalf of the OBAX-COMPLANT Consortium, President of COMPLANT, Mr. Gu Haitao, expressed delight over the MoU signing, saying he hope it “would culminate into helping NNPC achieve Nigeria’s renewable energy aspirations.”

Also responding on behalf of the CAPEGATE-NANNING Consortium, Chairman of the NANNING Board, Mr. Qin Chun Lin, said they looked forward to a great partnership with the NNPC on biofuels production.

Earlier in his remarks, the Deputy Chief of Mission at the Nigerian Embassy in China who supervised the MoUs signing, Ambassador Aliyu Bakori, said with over 185 million people, Nigeria remains a huge market for potential investors.

On her part, the Executive Secretary of the Nigerian Investment Promotion Commission (NIPC), Mrs. Yewande Sadiku, said the Commission’s doors would always be open to investors in need of relevant information towards investment in the country.