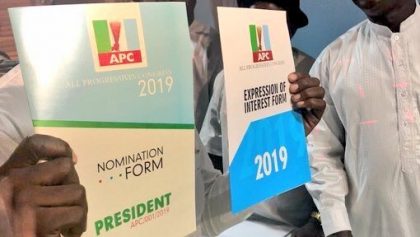 Adekunle made the appeal in an interview with News Agency of Nigeria (NAN) in Lokoja on Thursday, and urged that the fees should be made affordable for young political aspirants.

The youth leader said that President Muhammadu Buhari’s intention of signing the “Not-Too-Young-to-Run’’ Bill had not been demonstrated in the costs of the nomination forms announced by the party.

He said that if the prices of nomination forms were reduced, it would encourage some youths to contest and be part of the electioneering.

He stated that youths should no longer be left out of political contests.

According to Adekunle, the percentage of the youth population and their contributions to the success of the party’s electioneering in the forthcoming general elections need to be factored into the costing of nomination forms.

He appealed that forms for House of Assembly and House of Representatives should attract moderate fees to pave way for young aspirants into the legislative arm of government. (NAN)