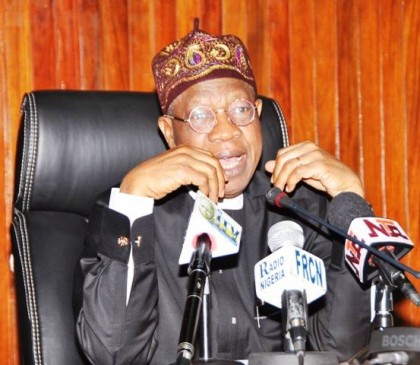 The Federal Government on Thursday admonished the media to stop denigrating the person of President Muhammadu Buhari through their platforms.

The Minister of Information and Culture, Alhaji Lai Mohammed gave the admonition when he paid advocacy visit to the Abuja office of the “Peoples Daily’’ newspaper to drum support for the national campaign against fake news.

Mohammed, who was reacting to a recent editorial published by a national newspaper, said while the press was free to criticise the President and the administration, such criticism must not be to smear the person of the president.

“There was an editorial in an otherwise respected national daily a few days ago that without any scintilla evidence, they denigrated the person of Mr President.

“Make no mistake about this, the media is free to criticise any President but not to denigrate anybody.

“If you have the facts, please come out. How can anybody say Mr. President favored one group than any other?

“The President of a country, irrespective of the party or tribe which he comes from, he is the symbol of the country.

“When you denigrate him, you are denigrating yourself. We, therefore, want to appeal to the media organizations to desist from this.

“Some of them are consumed by hatred and bitterness that they throw cautions to the winds. This is not healthy either for the media or for the country,’’ he said.

The minister stressed that fake news was beyond publishing what was not true.

“When you hide under editorial to pursue agenda which are driven largely by sentiment, emotion, vengeance, and bitterness, it does not augur well for the country,’’ he said.

Mohammed said that the issue of herdsmen and farmers clash in Nigeria was largely being driven by fake news.

The minister reiterated that the clash had little or nothing to do with ethnicity and religion; rather a fall out of demography, climate change and in some cases, criminality.

He urged the media to be vigorous and circumspect in looking at the issue before arriving at an erroneous conclusion.

In defending the position, the minister explained: “If you remember in 1960 the country population is 45 million today we are 190 million hence the struggle for scarce resources.

“Lake chad used to occupy 25,000sq km in 1963, today, the same lake has shrunk to 2500 sq km yet 35 million lives from Central African Republic, Cameroon, Niger Nigeria depend on the lake.\

“The Lake is the natural source for their fishing, irrigation farming and water supply.

“This is the tension we are seeing. It has nothing to do with religion or ethnicity.

The minister also gave the example of Zamfara state where he said the country had lost more lives to cattle rustling than those killed in Benue, Plateau, Taraba.

He said both the rustlers and the owners of the cattle in the Zamfara were Fulanis and Muslims.

“How do we input religious and ethnic motives into this? It is the duty of the media to look at this and interrogate it very seriously.

“It is a pity that the purveyors of fake news have not relented. They are perfecting their strategy to de-market this administration and it is so sad that some mainstream media have joined in this,’’ he said.

Mohammed also gave the recent fake report that 48 soldiers were killed as a result of Boko Haram insurgent activities.

He said even when the military had denied it vigorously, the media houses, including a respected international media organisation that published the story had not come out with any proof.

“When lives are lost, the military has the obligation to inform the family of the deceased so they cannot cover up.

“We should give respect to the gallant men and women in uniform who are daily sacrificing their lives for us to sleep. When you file this kind of report they are demoralized,’’ he said.

The minister said the rise in the phenomenon of fake news was because it was difficult by naysayers to fault the Buhari’s administration on performance.

“Whether on issues of security, infrastructure, fighting corruption agriculture or social investment programmes, we challenged anybody to a debate.

“ We will tell them exactly what we have done,’’ he said.

Mohammed said that fake news was a global issue and each country had a different approach to combating it including the UK that was contemplating legislating punitive fines on fake social media reports.

He, however, reiterated the position of the federal government not to coerce or censor but appeal to the sense of responsibility and patriotism of the media.

The Editor-in-Chief of the Peoples Daily, Hameed Bello thanked the minister for the visit and gave the assurance of the medium to keep fighting against the menace of fake news. (NAN)