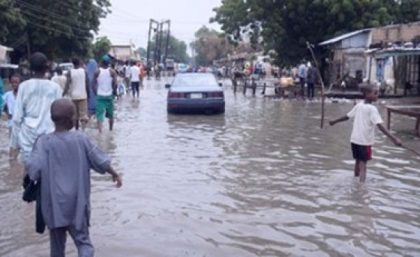 Residents of the flood-ravaged Technical College Road in Benin metropolis have appealed to Edo Government to construct drains in the city centre as a lasting solution to recurring flood.

Some of the residents, in separate interviews with the News Agency of Nigeria (NAN) on Wednesday in Benin, said the recurring flood was giving the people nightmares during rainy seasons.

They said the menace had compounded the environmental degradation of the city centre due to lack of drainage system.

According to them, the Technical College Road is one of the longest streets within the city centre and always flooded.

“Lack of proper drainage system constitutes an environmental and health hazard to residents.”

A trader, Chioma Okocha, who operates a shop on the street, said the area had been in a terrible state for many years.

Chioma said during the rainy seasons, residents were always constructing wooden bridges to enable them to move from one location to the other.

She called on the state government to urgently construct drains to address the problem.

Osauyi Omoye, a resident, attributed the upsurge in flooding to non-compliance to town planning regulations by residents.

According to her, developers are fond of erecting structures along the waterways while residents are engaging in the indiscriminate dumping of wastes on streams, drains and waterways.

She called on the state government to channel the waterways to a river or a canal as part of the initiatives to protect the environment.(NAN)