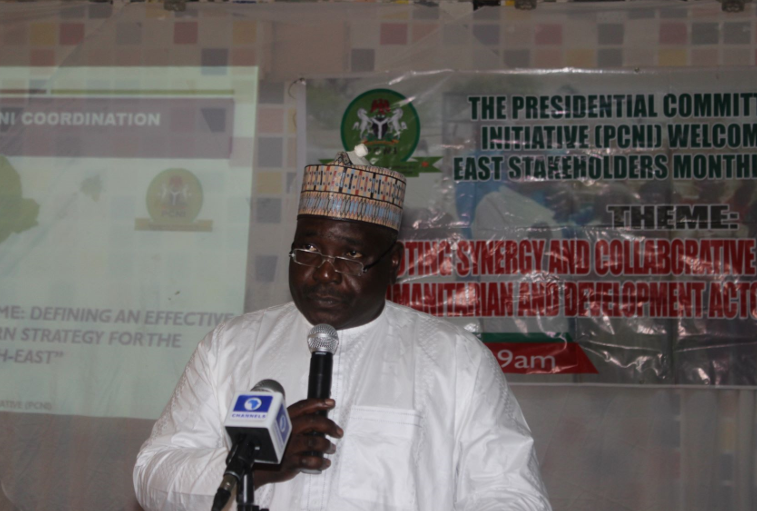 Partners Deliberate on Return of IDPs to Liberated Communities – @NePcni

After a brief hiatus, the Monthly Coordination Forum of the Presidential Committee on the North East Initiative (PCNI) returned on Thursday, September 27, 2018 with an edition convened to discuss the formulation of a comprehensive strategy for the safe, voluntary and dignified return of displaced persons in the North East to their communities.

The event which held at Sandralia Hotel brought together a cross section of stakeholders ranging from representatives of the governments of Borno, Adamawa and Yobe states, international development partners, civil society organizations, the armed forces, paramilitary services and other government agencies.

In his opening remarks, the PCNI Vice Chairman, Mr. Tijjani Tumsah, who represented the chairman, Lt. Gen. TY Danjuma (rtd) emphasized the need for close collaboration between all stakeholders to ensure the successful implementation of the planned return of some 1.8 million people that have been displaced by the insurgency. He reiterated PCNI’s commitment to working with partners to ensure that once people go back to their communities, they can access basic services that create the enabling environment for them to rebuild their lives

At the forum, the PCNI presented its draft national return strategy while calling for contributions and perspectives from all partners to enrich the document and to lead to a comprehensive final version.

The draft document addresses the needs of the entire spectrum of vulnerable people ranging from IDPs in camps and host communities to refugees in the neighbouring countries who are desirous of returning to their homesteads.

It stipulates conditions for determining the safety of an area and for commencing the return of civilians to the designated safe area as well as the programmes that will ensure that such resettled communities are sustainable.

Hajiya Saudatu Mahdi, a member of the PCNI, who presented the draft strategy stressed that various states are confronting various manifestations of the crisis of displacement and are dealing with them with diverse means.

As such, she said, the PCNI draft strategy is a global framework meant to provide standards and guidelines for the various contexts and situations on the ground rather than a one size fits all toolkit. With Borno, Adamawa and Yobe each addressing the issue of displaced persons according to the peculiar realities of each state, the draft strategy provides a framework for quality control and harmonizing certain minimum standard operating procedures while allowing states the latitude to continue to react nimbly to what remains a very fluid situation on the ground. She urged participants to see the strategy as a living document that will be amended to reflect fresh exigencies on the ground as they occur.

Mahdi also added that the PCNI will not be seeking to engage with the states on the basis of enforced compliance with the return strategy but rather to win their cooperation and compliance through persuasion – an approach which she said is already bearing fruit.

Representatives from Borno, Adamawa and Yobe presented updates on the ongoing return operations in their states, sharing their challenges as well as lessons learned. Hajiya Mahdi also highlighted the importance of consolidating on the resilience exhibited by communities in the area. She proposed that while emphasis is rightly placed on IDPs in camps and host communities, resilient populations who remain in dangerous areas against all odds have to be recognized and adequately catered for.

The forum also featured syndicate sessions in which participants interrogated various aspects of the return strategy ranging from peacebuilding and livelihoods support and empowerment for returnees to the restoration of civil authority in liberated areas.

There was a broad consensus among participants that the physical security of liberated areas is absolutely essential to the success of the return strategy.

They emphasized the need for the full participation of the IDPs, their communities and their leadership structures in the implementation of the return process so as to secure their buy-in. Such participatory and consultative approaches, they said, will also ensure the sustainability of the resettlements.

To this end, it was resolved that a joint assessment team be constituted to identify communities of return with a view to benchmark the resettlement strategy to reflect best practice, needs and expectations of the locals.

To mitigate public health risks associated with moving large numbers of people, participants prioritized the identification of common illnesses and the establishment of prevention mechanisms as well as basic health services in the communities of return.

They also called for the restoration of communications infrastructure that has been vandalized in many parts of the North East. The participants also proposed the formulation of a comprehensive framework that synchronizes military, non-military, humanitarian and developmental components of the return strategy seamlessly.

While expressing their gratitude to PCNI for organizing the forum, participants also urged the Committee to push for the political support of the forum’s resolutions at the highest levels of government in order to guarantee the success of the return process.