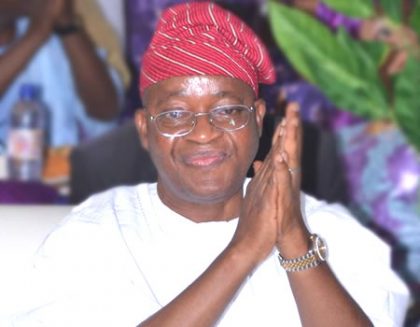 Alhaji Gboyega Isiaka, the Osun Governor-Elect on Wednesday received his certificate of return from the Independent National Electoral Commission (INEC), in Osogbo.

The News Agency of Nigeria (NAN) reports that the INEC National Commissioner in charge of Oyo, Ekiti and Osun states, Prince Adedeji Soyebi, presented the certificate to Oyetola.

NAN also reports that the Deputy Governor-Elect, Mr Benedict Alabi also received his Certificate of Return at the event.

In his remarks, Oyetola promised not to disappoint the people of the state who gave him the mandate in the Sept. 22 governorship election.

He said the people of Osun would continue to enjoy the benefit of good governance in the state.

Oyetola, who vowed to justify the confidence reposed in him by the people of the state, said he would run the all-inclusive and participatory government.

“I want to assure the people of the state that I will serve to the best of my ability and I will run an all-inclusive and participatory government.

“I will always consult the majority of stakeholders in the implementation of the policies and programmes that would have a positive effect in the lives of the people of the state.

“I will run people’s friendly government. The focus of my administration will be the welfare of the people of the state.

“We are going to work together to ensure that we justify the confidence people reposed in me,” he added.

Oyetola also commended INEC and security operatives for ensuring that the election was free and fair.

He also thanked Gov. Rauf Aregbesola for giving him the opportunity to serve under his administration and also prepared him for the task ahead.

In his speech, Mr Segun Agbaje, INEC Resident Commissioner in Osun said that the commission had done its best to deliver credible election and also promoted the image of INEC.

Agbaje commended the people of Osun for the maturity displayed before, during and after the election.

The REC said that issues raised by the US, UK and EU and the domestic observer groups during the election would be closely studied by the commission for further appropriate action.

He said, “I remained neutral throughout the election process.

“If at the end of litigation at the Supreme Court of Nigeria, the commission is found culpable for not discharging its responsibility faithfully and diligently, I will take full responsibility for any such laxity.

“And also publicly apologize to all Nigerians and thereafter resign my appointment with the commission.

“It should be put on record that the Commission carried out a thorough investigation of all the allegations of intimidation of voters suspected to belong to a particular party, violence, arrest of Journalists and observers raised by some groups.

“The commission discovered that all the allegations were not absolutely correct while the case of those arrested by the police with fake observer tags is still being investigated”.