Primaries: We Are Looking For Way Out Of Our Crises – APC Governors 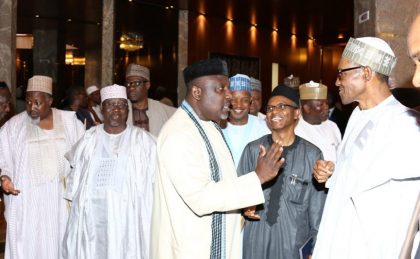 Gov. Rochas Okorocha of Imo says governors under the platform of the governing All Progressives Congress (APC) are looking for a way out of the party’s predicament resulting from its primaries.

Okorocha, the Chairman of APC governors forum, stated this while briefing State House correspondents on Thursday in Abuja

The governor disclosed that the meeting deliberated on various crises emanating from the conduct of the party’s primaries across the country.

He said the meeting also deliberated on the screening of aspirants for the 2019 general elections by the party’s National Working Committee (NWC).

“We came to review the various crises characterising our primaries with a view to finding a solution to them. So, we are looking for a way out in this regard.

“We are going to find a solution to the problems; our party believes in justice, equity and fairness.

“We are requesting that the right thing be done and everyone is allowed to contest in the elections,’’ he said.

The meeting which lasted for about two hours was attended by governors of Zamfara, Abdulaziz Yari; Oyo, Abiola Ajimobi; Ogun, Ibikunle Amosun; and Imo, Rochas Okorocha.

The News Agency of Nigeria (NAN) reports that some of them were not happy about the NWC’s decision on the primaries in their respective states.

Some of the governors were not comfortable with the party’s decision to offer automatic tickets to some lawmakers who remained loyal to the party when some others defected to the opposition. (NAN)