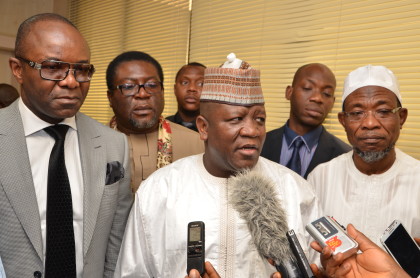 Gov. Abdulaziz Yari of Zamfara on Monday claimed that all primary elections of the All Progressives Congress (APC) ahead of the 2019 general elections have been concluded in the state.
The News Agency of Nigeria (NAN) reports that Yari’s declaration came at a time when representatives of the party from the APC National Headquarters said no election was held at all.

Yari alleged that the primaries had earlier faced challenges in the state following the failure of the first national committee Chairman, Abubakar Fari to conduct a credible exercise.

He said, “since we must conduct elections and declare results before 12 midnight of Oct. 7, we have done what is expected of us and we have submitted the results to the APC authorities.

“We do not know why those people (the second national committee led by Maj. Gen. Abubakar Mustapha (rtd.) are here, why they did what they did because I have since ordered for the continuation of the election on the 1st and 2nd of October.

“Because I am the leader of the party in the state,” he maintained.

He said, it was in order to meet the Independent National Electoral Commission (INEC) deadline that results were collated from all the 147 wards of the 14 local government areas of the state and submitted to the party.

He also said that this effort would ensure that the state was not left out in the submission of its candidates for the general elections.

The governor then directed the party Chairman in the state, Alhaji Lawali Liman to announce winners of the primaries for governorship, national and state assemblies.

According to the results, Alhaji Muktar Idris won the governorship ticket while  Yari was elected as the party’s senatorial candidate for Zamfara West, Sen. Tijjani Kaura for Zamfara North and Alhaji Ikira Bilbis for Zamfara Central.

However, Mustapha, the Chairman of the APC committee mandated to conduct the primaries in the state said, “as far as the committee charged with the responsibility of conducting the primary elections in Zamfara is concerned, no election was conducted at all.

“We have all the election materials intact in our position, and we are going to submit same as well as our report to the national secretariat of our party which mandated us to come and conduct the election.

NAN reports that party members had in the past two weeks turned out in large numbers to participate in the primary elections of the party especially after the directive from the APC National leadership to the state to adopt direct primary. (NAN)