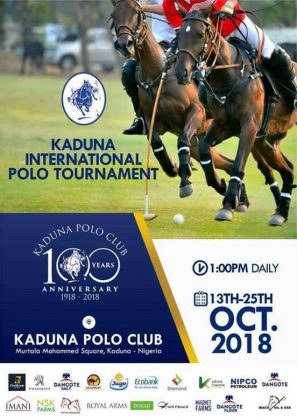 A total of 40 teams from the country are participating in the Kaduna Polo centenary tournament scheduled for Oct. 13, to Oct. 25.

President of the club, Suleiman Abubakar (Walin Keffi) said during a press briefing on Thursday in Kaduna.

Abubakar said the tournament would take place at the polo club in Murtala Mohammed Square Kaduna.

According to him, the centenary tournament is tagged “Tournament as celebration of legacy’’.

“The Kaduna Centenary Polo Tournament has witnessed an unprecedented turn out of sponsorship and participation, just as all is set for its galloping off on Saturday.

“We have witnessed an unprecedented turn out of participants and sponsorship for the centenary polo tournament. We are very happy with what has been achieved,” he said.

The President said that Kaduna Polo Club was rolling out the drums to mark its Centenary, from its inception in 1918 to 2018.

He said as a result, the club used the opportunity to embark on a massive renovation of the club house as well as its play grounds.

“40 teams are expected to participate and there are eight selected matches also to be featured.

“The teams would be coming in from Lagos, Port Harcourt, Kano, Ibadan Polo clubs and the Abuja Guards Brigade Polo Club.

“For the Georgian Cup and Emir of Katsina Cup which are high goal games requiring huge resources, 10 teams would be featuring.

“El-Amin and Fifth Chukker are to feature in Georgian Cup. Some of the legacies we will be celebrating are to exist for 100 years,” he said.

Abubakar said that the club was also celebrating the legacies of its founding fathers and the partnership they had with their sponsors.

He assured that renovation works at the polo club would be completed before the opening ceremony.

On security, he that all had been put in place, as well as a seamless access for sports reporters covering the tournament.

The president disclosed that he would be playing in the Georgian Cup.

Secretary of the Club, Ibrahim Kankia, appealed to the media to assist in creating more awareness for the centenary tournament.

He thanked the sponsors for their magnanimity and contributions in making the tournament successful.