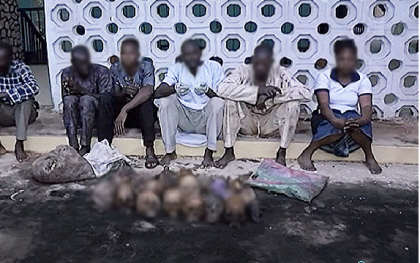 The Nigeria Police Force on Wednesday said it had arrested eight suspected ritual killers, including a woman with 11 human skulls in Ilorin, Kwara.

He said that the arrest followed complaints to the police in Ilorin of missing persons, kidnappings, and killings for ritual purposes.

The spokesman said that upon the arrival of the police joint investigation team in Ilorin on Oct. 5, Yakubu, the principal suspect, was arrested after a search was conducted in his No. 20 Ile Opa residence.

He added that “during the search, 11 human skulls, some pieces of human bones, human hair and powder suspected to be grounded human bones and charms were recovered in the house.”

Moshood said that the suspects were also involved in exhuming dead bodies from graves in the community and removing their vital body parts for sale to prominent personalities.

“The suspects confessed and admitted to having sold 31 human heads to some personalities in Ilorin and other towns in the state and other states,” he said.

The force public relations officer added that all the suspects made confessional statements to the police on the various roles they played in the crime.

He said that investigation was ongoing and efforts were being made to arrest other suspects mentioned by the suspects who were still at large.

The spokesman added that the suspects would be arraigned on completion of the investigation.

Speaking to newsmen, Yakubu said that Kadri had brought 20 human skulls that he exhumed from the Ilorin community central cemetery.

He said that he usually bring them in batches of four, six, and eight for safe keeping and collects them within a day or two.

Yakubu said that Kadri also informed him of personalities in Ilorin and other parts of the state that he supplies the parts to. ( NAN)