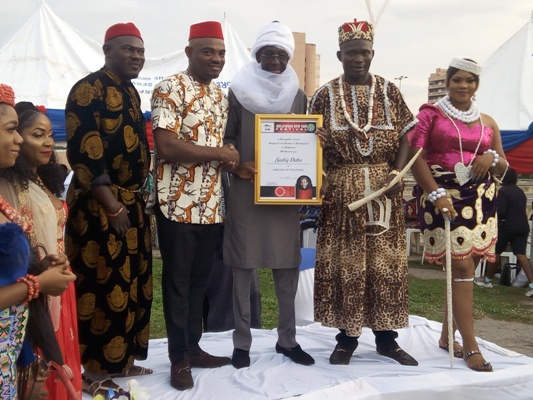 Veteran actor Sadiq Daba has been honoured as “Garkuwan Nollywood,” Hausa translation for “Shield of Nollywood,” by stakeholders in the motion picture industry.

The actor and former broadcaster received the honour at the 2018 Nollywood New Yam Festival Awards held on Thursday night in Abuja.

Daba, who many in the industry look up to as role model for his ingenuity, came to prominence in his acting career in the late 1970s, starring in the acclaimed “Cockcrow at Dawn” television series.

In 2015, he won the ‘Best Actor’ award at the Africa Movie Academy Awards for his role as “Inspector Waziri” in the award-winning movie “October 1.”

Emeka Rollas, National President of the Actors Guild of Nigeria (AGN), who bestowed the title on Daba, described him as a hardworking consistent foremost Nigerian actor who was an inspiration to the industry.

“He is indeed a shield in the industry as his wealth of experience and consistency has contributed greatly to Nollywood.

“Honour, they say, should be given to whom honour is due, and that is what the organizers of this award have done to this veteran entertainer, “he said.

Daba, who expressed appreciation for the award said: “I am humbled to be honoured today, and I will sincerely work towards defending the interest of actors and filmmakers to build a stronger Nollywood.”

NAN reports that other industry players honoured at the multi-cultural event include filmmakers and Nollywood enthusiasts drawn from different background.

Stephanie Apel, a Tiv-born filmmaker, was awarded the “Shanpepe of Nollywood” (shining star), for using films to address societal issues and grooming young talents in the process.

Also, Mrs Patricia Akpamgbo, was honoured as the “Agbalakaibeya of Nollywood”, and Mariam Habila, a Kaduna-born actress was crowned the “Nollywood Face of Culture for consistently using the motion picture to showcase Nigeria’s culture.

The Chairperson of the Association of Movie Producers (AMP) in the FCT, Mrs Imaobong Abia, was also honoured among others.

Mr Agility Onwurah,Chief Executive Officer of Agile 247.Com, organiser of the event , commended the awardees, adding that the honour was to “tell them that their contribution to Nollywood is recognised.”

“Nollywood is our own, and anyone who has contributed to its growth and development, in whichever capacity should be celebrated.

“We hope that this honour will spur them to doing more for our dear industry, “he said.

It was a night Abuja fans will not forget in hurry as they enjoyed the company of favourite Nollywood celebs while artistes and cultural troupes took their turns to entertain them.