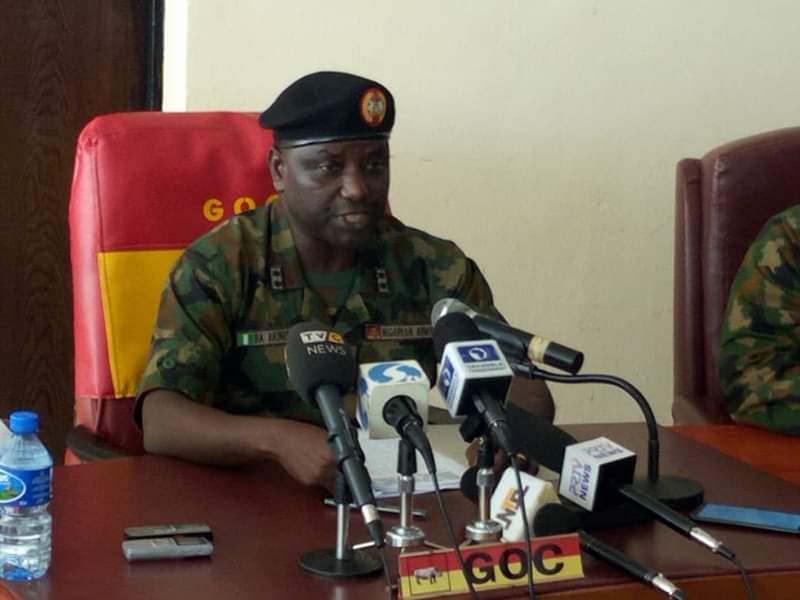 Gentlemen of the press, you are all welcome to 3 Division Conference Room, venue for today’s press briefing. In line with the Division’s drive of keeping the public informed through the media about the cordon and search operation being conducted for the missing senior officer, Major General Idris Alkali. I shall be briefing you on the latest development based on available verifiable facts.

You would recall that on 2 September 2018 at about 8:00pm, unknown gunmen attacked a shopping complex located at Lafande Community on the outskirt of Jos metropolis in Dura-Du District of Jos South Local Government Area of Plateau State. As a result of the attack, 11 people were killed while others sustained various degrees of injuries. The attack triggered protest by the people of the area on the morning of 3 September 2018. Irate youths in their hundreds trooped out, blocked the Eastern Bypass with stones and other dangerous objects. The immediate past Chief of Administration (Army), Major General Idris Alkali who recently disengaged from the Nigerian Army after 35 years meritorious service to the Nigerian Army and the country was travelling from Abuja to Bauchi via Jos same day. The senior officer was travelling alone in his black Toyota Corolla car with registration number, KWARA MUN 670 AA. Credible intelligence revealed that his car was stopped and he introduced himself as a general to the hoodlums who had barricaded the road that he was just passing through to Bauchi. The senior officer was assaulted and killed. Thereafter, his belongings such as clothings, cash, phones and laptop were shared by those who killed him. His body was dragged before being moved to somewhere else and his car was driven and pushed into the abandoned mining pit filled with water. The irate youths who followed his car to the abandoned mining pit filled with water on many tri-cycles popularly known as “Keke NAPEP” jubilated for reason best known to them or for mission accomplished. He was later buried in a shallow grave in an area popularly known as, “No man’s land” within the community.

Headquarters 3 Division was tasked to conduct a search and rescue operation for the missing senior officer by the Army Headquarters. The search and rescue operation is headed by the Commander 3 Division Garrison, Brigadier General Umar Muhammed. During the search and rescue operation at the Dura-Du District, soldiers deployed were warned not to eat and drink anything from the community for fear of being poisoned. Hence, soldiers were fed from the barracks throughout the duration of the operation. At the onset of task, on 20 September 2018, rented protesters made up of women from Lafande community and beyond were mobilized in their hundreds to protest against the evacuation of water in the abandoned mining pit. The women claimed that the evacuation of water in the abandoned mining pit would spiritually affects their children by making them to fall sick and their husbands would die. The protest by the women was therefore seen as an attempt to prevent us from showing the whole world the heinous crimes the community had committed over the years which were still ongoing before now. After the cordon and search operation, some people were apprehended. Those who were apprehended were those who witnessed or heard about the incident but failed to report to the nearest security agency. Also apprehended were those who were at the scene of the incident as at the time the senior officer was killed. Please be informed that some were released and others paraded and handed over to the Nigerian Police for further investigation.

Gentlemen of the press, ladies and gentlemen, having pumped the water from the abandoned mining pit for 2 weeks or thereabout despite protests by women attributing all kinds of mythical affliction that would befall their husbands and children, the following were recovered:

On 29 September 2018, a black Toyota Corolla Car with registration number KWARA MUN 670 AA, a customized T-Shirt with Nigerian Army Logo and the General’s name inscribed on it, as well as a pair of canvass shoe belonging to the deceased senior officer.

You will have the opportunity to interact with the families of the owners of the Toyota LiteAce Bus and Rover car immediately after this press briefing.

On 29 September 2018, when the general’s black Toyota Corolla car was recovered from the abandoned mining pit, those involved and those not involved in the killing of the senior officer held a meeting to relocate his corpse away from the community. This is because of the inherent danger it would attract to the community. Consequently, a 10 man team was constituted to relocate his corpse earlier buried in a shallow grave within the community to elsewhere. A specialist in preservation of corpse was contracted. The specialist assisted in exhuming his corpse from the shallow grave to elsewhere. Only few trusted members of the community knew where his corpse was relocated to. The specialist is currently in our custody. Again, this is an attempt to cover up the heinous crime committed by the community. There exist other evidence and indicators that pointed to the fact that those who were involved in the killing of the senior officer are being supported and backed by community leaders within the Dura-Du District. In recent times, they have been staging press conferences and writing petitions in order to smear the image of the Division in particular and the Nigerian Army in general. This Division will not yield to the antics or blackmail by those who have committed this dastardly crime. Therefore, the following people at large have been declared wanted by the relevant authority based on their degree of culpability in the killing of the senior officer:

Da Chuwang Samuel (aka MORINHO). He is 28 years old and a panel beater by profession. He hails from Doi Du village area of Jos South Local Government Area of Plateau State. He was believed to be the master mind in the assault and killing of Major General Idris Alkali.

Mr Nyam Samuel (aka SOFT TOUCH). He is 25 years old and a panel beater by profession as well as younger brother of “Morinho”. He was believed to have been involved in the assault and killing of the senior officer.

Mr Pam Gyang Dung ( aka BOSS). He hails from Latya 2 Doi Du Village in Jos South Local Government Area of Plateau State. His profession is farming and mining. He is also the Mai Anguwa of Latya 2. “Boss” who is 53 years old is a friend to “Morinho”. He was also believed to be involved in the killing of Major General Idris Alkali.

Mr Mathew Wrang (aka AMESCO). He is 27 years old. In addition, one locally made pistol was recovered from his house during cordon and search operation.

Mr Timothy Chuan. He is 26 years old. He is a tipper driver and also a sand vendor by profession. He was identified to have driven the senior officer’s car to Dura village and subsequently pushed it into the abandoned mining pit filled with water.

Da Yakubu Rap. He is 52 years old and the district head of Dura village. He co – chaired the meeting held to relocate the corpse of the senior officer from a shallow grave to elsewhere immediately his car was found in the abandoned mining pit filled with water.

Mr Chuwang Istifanus Pwajok Stephen (aka TIFA). He is 46 years old and a surveyor/business man by profession. He participated in the meeting held to relocate the corpse of the senior officer from a shallow grave to elsewhere after his car was found in the abandoned mining pit filled with water.

Please note that 4 different sources not known to each other at various times took us to the opened shallow grave where the senior officer was earlier buried but subsequently removed. Furthermore, sniffer dogs that have been cultured with the personal effects of the senior officer led us to the same opened shallow grave. That was the only grave we were led to by different people and sniffer dogs. We did not go to any other grave as the operation was carried out based on credible intelligence. Like I always say, the cordon and search operation is intelligence driven and that is why the operation has been conducted in line with international best practices and respect for human rights. This further explains why the Division did not clamp down on the entire community. Only the perpetrators are being targeted.

At this point, let me reiterate that all the actors involved in this dastardly act who are still at large are known to us. All efforts are being made to get them arrested and be brought to justice as their photographs and personal details are with the relevant security agencies. The cordon and search operation conducted by own troops has really exposed the heinous crimes being committed by the few but fully supported and concealed by the entire community. I want to commend members of the public for their cooperation and still solicit for anyone with credible information on where the senior officer was reburied. It is the civic responsibility of the Dura-Du community to produce the corpse of the deceased senior officer and those who were involved in the killing of the senior officer. This Headquarters can be reached on GSM number 09074028881 as sources of information would be protected and treated as confidential. Let me use this opportunity to appreciate all those that supported us during the search and rescue operation. A letter had earlier been formally written to appreciate Vehicle Inspection Office, National Emergency Management Agency and all the good and peace loving people on the Plateau. In the same vein, let me also appreciate the support from all other security agencies such as Operation SAFE HAVEN, Nigerian Air Force, Nigeria Police, Department of State Services, National Security and Civil Defence Corps and Fire Service as well as all other security agencies for their support throughout the entire operation. Above all, let me appreciate the Chief of Army Staff (COAS), Lieutenant General Tukur Buratai and his Principal Staff Officers for their strategic guidance and support. I also want to appreciate the Director Military Intelligence and the Provost Marshal (Army) for their technical and specialist support. Similarly, I wish to commend and appreciate all commanders and principal staff officers of this Division for their hard work and diligence. Our operations will continue until the corpse of the deceased senior officer is recovered and the perpetrators of this heinous crime are arrested.

Finally, the Division also wishes to emphasize its adherence to the principles and respect of human rights in the discharge of its constitutional roles. It further calls on everyone within its Area of Responsibility to remain vigilant and report any suspected breach of the peace to security agencies.