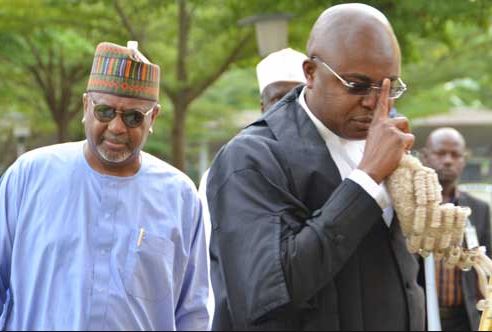 The Federal Government on Tuesday applied to the Federal High Court in Abuja to continue the trial of the former National Security Adviser, Sambo Dasuki in absentia.

The News Agency of Nigeria (NAN) recalls that Dasuki is standing trial on alleged illegal possession of firearms.

Mr. Oladipupo Okpeseyi (SAN), counsel to the government said the motion became necessary following the defendant’s refusal to appear in court for trial.

Okpeseyi brought the motion in line with Section 352(4) of the Administration of Criminal Justice Act, 2015.

He told the court that Dasuki’s refused to be brought to court was an affront on the court, adding that the court had the express right to go on with the trial without Dasuki’s presence in court.

Okpeseyi said he was not aware of the ex-NSA’s letter or the fact that he would refuse to attend his trial as scheduled, until the morning of the adjourned date.

“My lord, it was this morning that he said no! I have written to the court that I am not coming. No am not coming’’, Okpeseyi quoted Dasuki as saying.

Okpeseyi had accused Dasuki of deliberately challenging the authority of the court since the case was specifically adjourned for the continuation of trial.

He argued that Dasuki’s continued detention had no nexus with the extant case, saying he was duly granted bail by the court before other allegations suppressed the initial bail.

Mr. Victor Okwudiri, counsel to Dasuki had objected to the application to try his client in his absence.

Dasuki had formally written a letter dated Nov. 12 addressed to the registrar of the court expressing worry over his continued detention.

He said President Muhammadu Buhari had in his maiden media chart preempted the decision of the court on his trial.

He alleged that the president had said that the allegations brought against him were weighty and such that he could jump bail if granted.

Dasuki said the court and the prosecutorial agencies had so far lived up to the pronouncement of the president by denying him to enjoy his multiple bails granted him by courts.

Dasuki said he had unjustly suffered unabated persecution in the hands of the current administration.

“The prevailing circumstances have prompted me to write this letter to the court.

“It seems to me that the current administration has so much interfered with the judicial system, such that it has become practically impossible for the court to maintain its independence.

“The resolve to continue detaining me against the several orders of courts and in brazen violation of the Constitution is wrongful and arbitrary.

“It has inflicted physical, emotional and psychological torture on my family and me.

“ The decision of the Federal Government of Nigeria is not only high-handed, but it is also arbitrary and in violation of both domestic and international laws on human rights.

“At this juncture, it will seem that the Nigerian Government is not inclined to yield or obey the orders of any court of law, whether domestic or international.

“Ironically, the Federal Government still wants to ride on judicial wings to prosecute me, when it does not comply with the orders that proceed from the courts, especially in relations to me.

“At this point, I strongly believe that there must be an end to this hypocrisy and lopsided/partisan rule of law.

“ Since the Federal Government has resolved not to comply with judicial orders directing my release, it is better for the court to also absolve me of the need to submit myself for further prosecution.

“Justice should be evenly dispensed as opposed to the same being in favour of the Federal Government of Nigeria. Kindly bring this information to the attention of his lordship’’, Dasuki said.

Giving ruling, Justice Mohammed held that the Federal Government should approach the court with an affidavit as against seeking such prayer orally.

“As at this morning, I do not have any affidavit from the prosecution for the trial of the defendant to continue in his absence, otherwise, I would have made the order”, the judge said.

On Dasuki’s letter, the judge held that the court would not honour the letter since it was written and sent to the court by the defendant and not through his counsel.

Mohammed also held that it was wrong for any party in a criminal matter, to directly exchange correspondences with the trial court.

The judge further said he had directed the court clerk to return the letter back to whoever brought it.

Mohammed thereafter adjourned the trial until Nov.19 for continuation.

The prosecution averred that some range of firearms without requisite licenses were on July 17, 2015, found in Dasuki’s Asokoro, Abuja’s home.

The federal government alleged that Dasuki by such act had committed an offence punishable under Section 27 (1)(a) of the Firearms Act Cap F28 LFN 2004.

Dasuki was also accused of retaining unjustified sums of foreign currencies in the same house contrary to Section 15 (2) (d) of Money Laundering Prohibition Act 2011 among others.

NAN also recalls that the defendant is also standing trial on the allegation of misappropriation of 2.8 billion US dollars meant for the procurement of arms for the military in 2015.