I petitioned EFCC against senator Nwaoboshi based on anonymous document – witness

Nwoboshi, representing Delta North Senatorial District, was charged by the EFCC before a Federal High Court in Lagos. 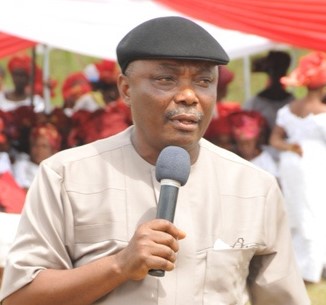 He is standing trial along with two companies – Golden Touch Construction Projects Ltd. and Suiming Electricals.

The commission re-arraigned the accused before Justice Chukwujekwu Aneke on Oct. 5, following the elevation of the previous trial judge, Justice Mohammed Idris, to the Court of Appeal.

At the resumed hearing on Tuesday, the prosecution counsel, Mr O.A.R. Ogunde (SAN), informed the court that the first prosecution witness was available for evidence.

The witness, Mr Prince Kpokpogri, an anti-corruption crusader, and real estate manager, was led in evidence by Ogunde.

The witness told the court that he knew the accused.

He said that sometime in 2016, an anonymous caller informed him that he had a document for him.

According to him, the caller left the document in front of his (Kpokpogri’s) office door.

He said that when he saw the document, he perused it carefully and then wrote to the EFCC for further investigation.

When shown the letter, he confirmed it as the same.

The court admitted the document in evidence and marked it as Exhibit P1.

During cross-examination by defence, the witness rebutted the assertion that he had a duty not to expose individuals to unfounded allegations of crime.

When asked if his petition to the EFCC was formed from the document left in his office, he replied: “It is from what I saw that I wrote.”

On who placed the value for a house at N4.5 billion as stated in the petition, he said that he valued the property through the document as well as through the anonymous caller.

The witness added that he visited the property.

He was silent when asked how he came about another figure of N7.5 billion in the document as the value of the property.

Kpokpogri said he knew before writing his petition that the said property was sold by the Delta State Government.

Defence counsel said, “Nobody gave you such anonymous information; you thought it out yourself.”

Defence: “Did you ever confront the defendant with this document?”

When asked if he knew one architect Joseph Ajiri, he said: “Ajiri is the current Commissioner for Housing in Delta and one of my trustees.”

He testified that Ajiri gave him a document in his private office as the Chairman of Delta State Oil Producing Areas Development Commission.

Justice Aneke has adjourned the case until Nov. 26 for continuation of trial.

According the EFCC, Nwaoboshi and Golden Touch Construction Projects, purchased a 12-storey building, known as Guinea House, on Marine Road in Apapa, Lagos, for N805 million in May 2014 and June 2014.

The anti-graft agency claimed that N322 million out of the N805 million was part of proceeds of “an unlawful act of fraud.

The EFCC alleged that the N322 million was transferred to the property’s vendor on the order of Suiming Electricals, which was accused of aiding the accused to commit money laundering on May 14, 2014.

The alleged offences contravene the provisions of Sections 15(2)(d) and 18(a) of the Money Laundering (Prohibition) Act 2011. (NAN)