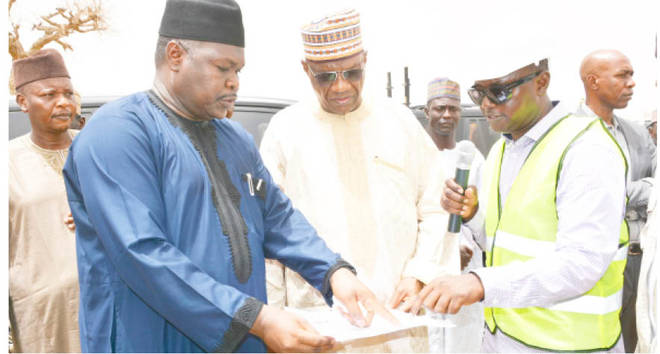 Alhaji Shattima Ali, Yobe Commissioner for Works, Transport and Energy has said that ongoing construction work at the International Cargo Airport, located in Damaturu is above 50 per cent completion.

The commissioner made this known on Wednesday while briefing the state governor Alhaji Ibrahim Gaidam who paid an inspection visit to the site.

Ali said “So far the progress achieved as at November 6 in the report sent to the ministry by the team of engineers along with the contractors, precisely stood at 55.5 per cent.

“Though by now, the progress should have passed 60 or 70 per cent, but the progress is slowed down for obvious reasons, particularly where new observations were raised along the line.

“For instance, the distance of the runway which is contained in the plan was 3.1 kilometres but later on was extended to 4.1 kilometres among other amendments,” he said.

In his remarks, the governor noted that the initial sum of the contract which was N11.3 billion was later reviewed to N15.5 billion as a result of the necessary amendments made.

The governor commended the contractor as well as the engineers for transparency and qualitative work done so far. (NAN)