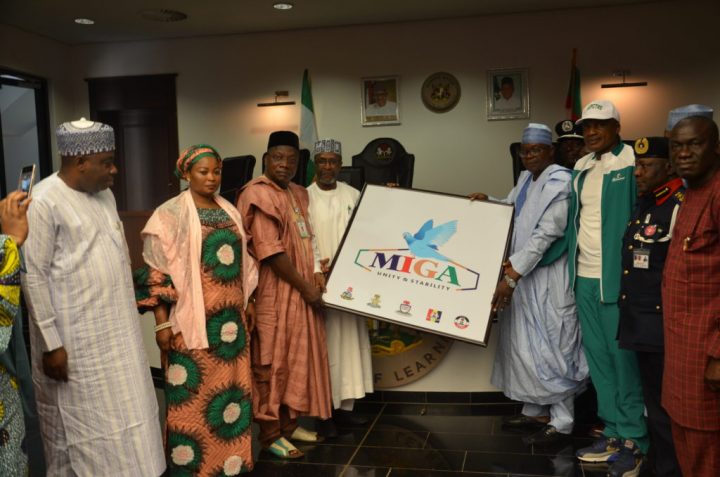 The Governor of Kaduna State, Nasir El-Rufai on Saturday said that the state was safe enough to host the 2018 Ministry of Interior Games (MIGA) to hold from Nov. 23 to Dec. 1.

El-Rufai said this when a delegation of the Ministry of Interior led by the Permanent Secretary, Mohammed Umar in company of the chairman of the Main Organising Committee, Alhassan Yakmut visited him in Kaduna.

El-Rufai who was represented by the Secretary to Kaduna State Government, Balarebe Abba said since the resumption of his administration, proactive measures had been taken on issues of security.

”When we came in, we learnt a lot of issues concerning security, we are always there when things like this are brought, and you can see what happened during the recent incident that happened around Kasuwan-Magani.

He said that the MIGA was a way of telling people that Kaduna state was secured.

According to him, security in Kaduna is something that has been handled and can easily be handled at any given time.

Speaking earlier, Umar said that the choice of Kaduna as the venue of the biennial sporting events was essentially to showcase that adequate tranquility was now being experienced in the state.

He said that no fewer than 25, 000 spectators were expected at the event.

”Kaduna has proven to be a state that is hospitable and peaceful over the years. The entire para-military security formations agreed that staging the sporting events will further boost the effort of the state government in restoring adequate security to the state.

“Before, during and after the games, we will continue to support the security initiative of the state government. On the opening day of the competition which will be declared open by President Muhammadu Buhari himself, about 50, 000 persons are expected.

“Guests from our neighbouring countries like Niger, Benin Republic among other are expected too,” he said.

Umar solicited for the state government to carry out necessary upgrade at the competition venues.

”It is therefore our prayer that the Kaduna State Government assists in carrying out the necessary refurbishment needed by the various facilities as highlighted by assessment.

”I wish you will kindly direct and support the immediate upgrading of the state of facilities to meet the competition standard, that is my own prayer and I hope that this game would bring prosperity, business activities would boom,” he said.

Also speaking, chairman of MIGA MOC, Yakmut said over 1000 athletes expected to contest in 90 different events had intensified preparation and that various gray areas especially as regards competition venues had been outlined.

According to the former Director General, National Sports Commission, “We are working assiduously to ensure successful delivery of the sporting competition.

”Apart from the desire by the various athletes to make sure their agencies come out tops, this event will also be a discovery ground for talented athletes who will certainly do Nigeria proud in international outings,” he said.

Among the 2226 participants expected, 1410 are athletes, 156 team Officials, 24 federation officials.