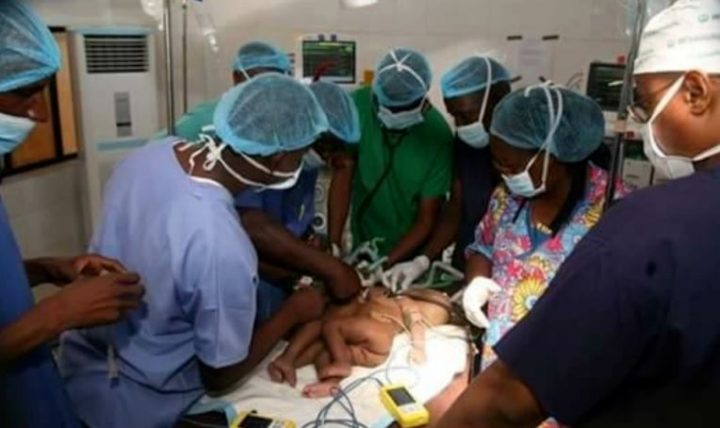 The University of Abuja Teaching Hospital (UATH) says the set of co-joined twins separated by the hospital are in healthy condition and have been discharged home since Nov. 23.

Dr Eyinade Olateju of the Department of Paediatrics of the Hospital said this on Friday in Gwagwalada at the monthly clinical continuing education of the hospital.

Olateju, in her presentation on Post Surgery care for the separated twins, said the operation was carried out on Oct. 29.

“We were not in a hurry to discharge them because we wanted to monitor their vital signs and ensure that they could breastfeed well.

“We monitored their vital signs and ensured that the breast milk is safe for them.

“We are happy that they were each weighing 6.2 kg at the point of discharge,” she said.

According to her, a baby should naturally double its birth weight after six months, but the conjoined twins are not up to six months.

Dr Samson Olori, the Lead Surgeon in the operation said keeping the babies alive and strong was a challenge because they were delivered through a caesarian section.

“The babies did not have immediate maternal care, so we had the challenge of feeding them and ensuring that they were nourished before surgery; as well as the challenge of malaria and other infections.

“We were however, able to overcome all the challenges,” he said.

Olori said that medical investigations and X-ray were immediately commenced to know the organs that were joined.

He explained that preparations for the surgery only started after laboratory findings had shown that the babies were fit for the operation.

“The team was divided into two groups to ensure that the babies were given attention simultaneously after the surgery that lasted for about four hours,” he said.