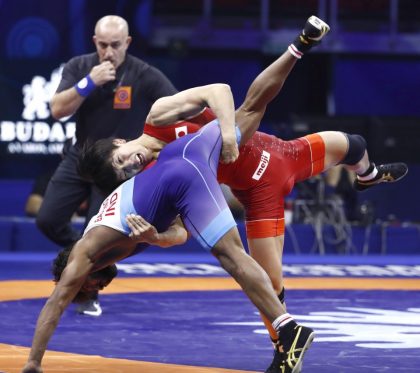 Solomon Dalung, the Minister of Youths and Sports Development, on Friday said Nigeria would dominate the wrestling sport with proper investment and training.

Dalung told newsmen at the Abuja National Stadium that wrestling was fast becoming a Nigerian sport and only needed the required investment, interest and commitment from youths.

He added that this would help the country to dominate the sport in Africa and across the world.

The minister said the sport would grow rapidly if more youths continued to show interest in the sport.

“Also, if more stakeholders indicate genuine interest and commitment to developing the sport through investments and other means of support, the sport would grow.

“Wrestling is becoming a Nigerian sport because we have African and world record holders in wrestling.

“It is a familiar terrain and I think that the joy of it is that there is an increasing zeal among the young people into the wrestling sport.

“With proper investment, Nigeria will dominate wrestling globally and overthrow the Asian countries that currently seem to have a monopoly over the sport.

“But in female wrestling, they cannot face Nigeria because we have world records in that category,” he said.

Dalung said the election of Daniel Igali as President of Nigeria Wrestling Federation (NWF) was a huge positive factor for the renaissance in the wrestling sport.

“This is because of his history as a former wrestler who won many medals in the sport.

“One of the factors that I considered responsible for the rapid growth is the fact that the president of the federation is a professional.

“He was a wrestler. He won medals in so many national sports competition before he became a world champion.

“I think he brought to bear his wealth of experience as an athlete, as a professional and now as an administrator. You can see the effect of his leadership in wrestling. More youths are showing interest,” he said.

Dalung assured that with the constant organization of the National Sports Festival (NSF) and adequate investment by stakeholders, the wrestling sport would grow bigger in the country.

“With this, there is the possibility of medals for the country in international competitions,” he said. (NAN)