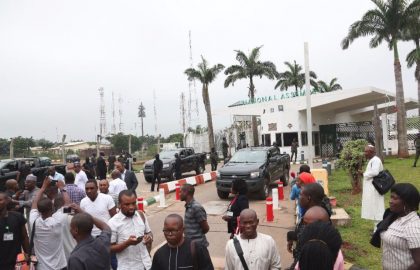 The News Agency of Nigeria (NAN) reports that business activities at the National Assembly complex, Abuja was paralysed on Monday, as members of PASAN commenced a 4-day warning strike which will run till Thursday.

The National Assembly workers are demanding payment of their outstanding salary arrears, allowances and other welfare packages.

Okereafor said that the ongoing strike would cause a major setback as regards the 2019 National Budget Presentation by President Muhammadu Buhari on Wednesday, to a joint session of parliamentarians.

He noted that if not checked, the strike would affect the 2019 appropriation if relevant agencies and government offices concerned do not find lasting solutions to the demand of the PASAN members.

According to him, this is coming in the face of the consistent industrial actions embarked upon by various unions in the different sectors, especially in the education sector.

NAN’s image maker expressed concern that the negative development of the various strike in the education sector was becoming absolutely unbearable for Nigerian students.

“Yet, PASAN has shut down the National Assembly over a mirage of issues and this shut down will definitely affect the proposed 2019 Budget Presentation by Mr President on Dec. 19.

“If the presentation is delayed and presented next year, there will be a spiral negative effect of the late presentation on our economy generally,’’ he said. (NAN)