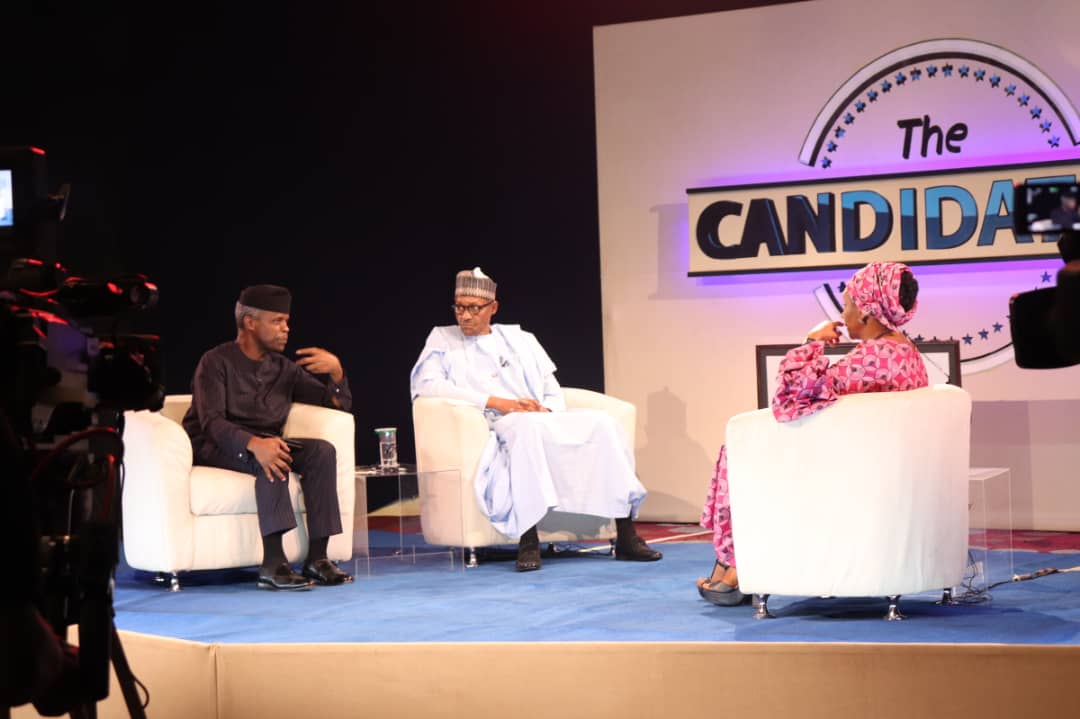 President Muhammadu Buhari has reiterated his commitment to free, fair and credible election in the 2019 general elections. The President who stated this during a live TV town hall meeting tagged ‘The Candidates’ said he would gladly accept result if defeated even though he was optimistic of winning the election.

The TV town hall meeting was jointly organised by Nigerian Television Authority and Daria Media was moderated by Kadaria Ahmed and feature questions from the participants.

The President and the Vice President who are the candidates of All Progressive Congress responded to a number of questions ranging from Corruption, Infrastructural development, security and economy.

President Buhari while responding to questions on how he is handling corruption cases particularly, the case of Babachir Lawal former SGF,  said “That is not fair criticism of the government. I do not think there is anybody that is being pointed out as corrupt in this dispensation which we looked the other direction.

“I told you why I have to be careful; the public should help us, if there are strong allegations that are backed up with evidences, bank accounts, names of companies floated and contracts awarded.

“Then we will take them before the courts through the EFCC and ICPC; and we have to trust the system and allow them to complete investigation.

“If we just take people in as we did during the military and lock them up, the present democracy multi-party democracy does not approve of that.

“If you accuse any person, you have to provide evidence in court for him to be prosecuted. So, if there are strong allegations, the government may decide to ask people to go, like in the case of the former Secretary to the Government of the Federation, we asked him to go.

“The matter is already before the EFCC and I believe that a directive has been issued to charge him and all persons who have cases before the EFCC.’’

The Vice President Yemi Osinbajo while supporting the President on corruption issues said the administration has been able to block the loopholes with the Treasury Single Account (TSA). He said that all recovered looted funds will be used for developmental purposes after budgetary processes and approval of the National Assembly.

On properties, he said the ones that final forfeiture, have been secured, such (assets) become the property of the state unless where there was a legal claim to it.

On security, the VP said, farmers’ herders clashes especially in Benue, are attributable to the climate change. Saying the development was getting worse because of desertification, adding that the federal government is collaborating with neighbouring countries to address it.

The vice president said that the long term plan to address the development was to create ranches, saying that water dams were presently being created by the federal government as a short term measure.

He said the federal government was making efforts to recharge the Lake Chad which is shrinking.

Responding to Economic matters, Vice President Professor Osinbajo explained that their efforts at revamping the economy has been great. He said there was a government in this country where $292m was withdrawn weeks to the election another 40bn was withdrawn, “we have the evidence, poverty at that time was still at the 112”, today we are spending a mere 20b for 2M people which he said economy has continued to grow stronger through many interventions by the government.

President Buhari and Vice President Osinbajo of the APC are the second in the series of ” The Candidates” Town hall after Kingsley Moghalu and Ummah Getso feetured last week.