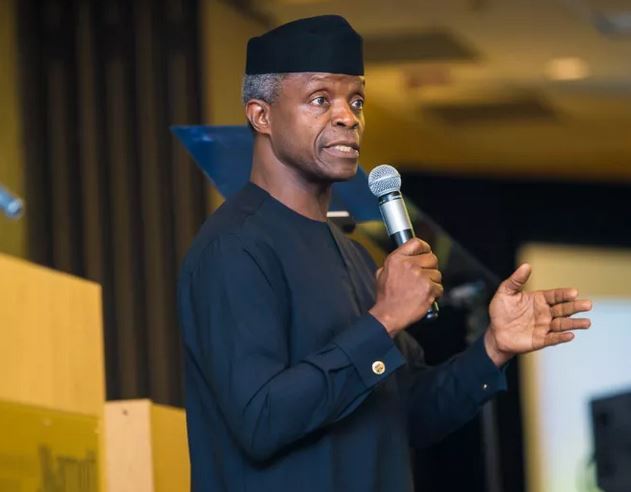 The Federal Government has promised to invest in the animation industry and other creative sectors to make jobs available for youths, boost GDP, and achieve economic growth.
Vice President Yemi Osinbajo stated this at the end of a four week-training for 1500 youths who participated in the N-Creative programme held in Benin
The News Agency of Nigeria (NAN) reports the N-Creative is a component of the N-Power social investment programme of the federal government to empower Nigerian youths for prosperity.
The Vice President who was represented at the event by the Edo Governor, Mr Godwin Obaseki, said boosting creativity skills of the youths was at the core of the next level agenda of President Muhammadu Buhari’s second tenure.
“Creativity is centre to our government’s next level agenda as it will help tell our success stories in digital ways, drive employment, and tell our unique perception to the world’’.
The vice president noted that the total value of the global animation industry was 259 billion dollars in 2018 and it was projected to reach 270 billion dollars in 2020 noting that Nigeria must benefit from such investment.
“Animations are used in film production, games, adverts, medicine, training and education, e-learning, legal and insurance and 3D visualization.
“It employs a lot of workforces and lucrative for the businesses and workforce,’’ he said.
Osinbajo assured that the federal government would create an enabling environment for local production of animation content so that the country could be a pioneer hub in Africa in the light of the Africa Continental Free Trade Agreement.
“We intend to support the industry by exporting the services of young creative Nigeria and start to participate in the global outsourcing market,’’ he said.
He said for the sector to thrive, the country needed fission of creative minds and creative enterprises on a scale that will make significant in the national and global space.
Osinbajo said the N-Creative programme will stimulate creative and innovative skills in young Nigerians in the studio environment and animations.
He said it will also boost other relevant skills and link them to already established animators to produce educative and creative content.
“We are building your capacity and investing in the basic tools you will need to succeed in the creative world.
“The idea is that some of you will end up as entrepreneurs while others will be absorbed into the industry”.
Gov. Obaseki, on his part, said his administration was putting in place the basic infrastructure to support the growth of the animation industry in the state.
“We are putting in place the core infrastructure required to set up animation industry, we are laying fibre optics, strengthening our basic education sector, creating an alternate source of energy and building proposed Benin Enterprise Park.
“With government policy and infrastructure, we will be the silicon valley for animation in this part of the world,’’ he said.
In a welcome address, Mr Afolabi Imonkhuede, said the N-Creative, focused on harnessing and developing the untapped skills of the Nigerian youths in the creative arts and entertainment world that would compete globally.
Imonkhuede a Senior Special Assistance to the Vice president on Jobs Creation said 3000 youths were to be trained in the N-creative programme across the country-1500 each from southern and northern regions.
He said the 1500 youths from the 17 Southern states had completed a four-week creative training in the first phase while training for the northern states would commence soon.
Imonkhuede said the participants were trained in animation, voice acting, Post-production, Graphics and Illustration and scriptwriting and were given working tools to do practicals.
“The next phase for the youths is studio training to practicalize what was learnt in phase one’’.
He urged the participants to see the training as an investment and to become worthy ambassadors of the programme to impact others. (NAN)