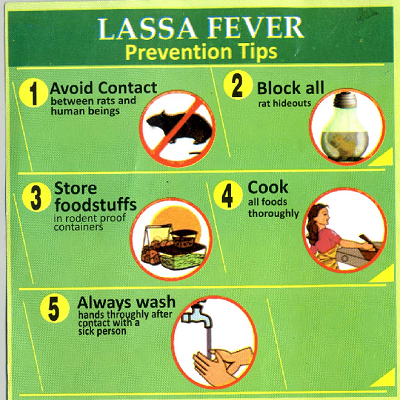 Taking fight against Lassa fever to the next level

The Nigeria Centre for Disease Control (NCDC) has adopted public enlightenment and awareness creation strategy and timely intervention to check the alarming rate of Lassa fever outbreak in the country.

Statistics released by the NCDC, showed that between January and July 2019, Lassa fever claimed about 139 lives, with 615 confirmed cases, 17 probable and 2,327 negative in 22 states.

The figure represents 22.6 per cent fatality ratio in confirmed cases, while the predominant age-group affected is 21-40 years.

Dr Chikwe Ihekweazu, the Director General of NCDC, said the organisation was working towards establishing treatment centres in the 36 states of the federation, including the FCT.

He said that the centre would ensure quick response to infectious diseases in the country.

Ihekweazu explained that the treatment and isolation centres would be established in collaboration with state governments, where such facilities were lacking.

Ihekweazu said that for now, there are 15 Emergency Operation Centres (EOCs) in the country.

He said that the establishment of the EOCs would help coordinate the response to infectious diseases from the Incidence Coordination Centre (ICC) in Abuja.

Edo is one of the states that has established a treatment centre.

The treatment centre located inside the Stella Obasanjo Hospital, Benin City, will handle cases in Edo South, as the state plans to build another treatment centre in Auchi, for victims in Edo North.

There is already a treatment centre located at the Irrua Specialist Teaching Hospital (ISTH), for victims in Edo Central.

Dr David Osifo, former Commissioner for Health in Edo, said the idea of locating treatment centres in the three senatorial districts of Edo is to decongest the ISTH.

“We plan to duplicate the equipment we have in ISTH, at the Auchi treatment centre; this means that each of the three senatorial districts in Edo will have a treatment centre.

“By the time we put all these facilities in place, we are sure that the high mortality rate of Lassa fever in the state will drop,” Osifo said.

The NCDC is reviewing its strategies to tackle possible Lassa fever outbreak in 2020.

The strategies include increased training   of health workers, awareness creation campaigns- before the outbreak and early deployment of One-Health Rapid Response Teams, to affected states, among others.

A review of activities at the ISTH and some communities in Esako West Local Government Area, of Edo, which accounted for the highest number of cases, showed that funds would play a major role if progress must be made in controlling and eradicating Lassa fever and other infectious diseases.

With a robust response, Lassa fever cases could significantly decline from the fatality rate of 27 per cent and 22 per cent in 2018 and 2019 respectively, to a lower level considered not to be a national emergency.

Ihekweazu noted that the Federal Government was aware of the importance of adequate funding, adding that the aim was to ensure funding was not a hindrance in tackling the Lassa fever challenge.

“We are providing resources through the Basic Primary Healthcare Provision Fund (the new funding instituted by the Federal Government) to cover the cost of treatment of confirmed cases of Lassa fever patients.

“The aim is to make sure that ability to pay is not a barrier to accessing the treatment for public health diseases such as Lassa fever,” Ihekweazu said.

Prof. Sylvanus Okogbenin, the Chief Medical Director of the ISTH, said that the NCDC and its partners have done so much to curtail the spread of Lassa fever and other diseases.

He said that the NCDC supplies the hospital Ribavrin, the major drug used in the treatment of Lassa fever patients, free.

To achieve more result, Okogbenin said that Lassa pack, that sold for N19,500, was sometimes given out free to those who cannot afford them, just to ensure that they do not go back to their communities with the disease.

“We are happy to do the work we are doing and we enjoy the support we get to discharge our duty.

“Otherwise, Ribavrin is very expensive, and if we are going to give a patient the cost for 10 days, ordinarily it will cost over N400, 000, but it is given to us free and we give to the patients free.

“We have a new technology for Lassa fever test, which cost about N250,000, just to see whether a suspect is positive or negative, but when we get supplies from NCDC and Federal Ministry of Health, we  also conduct the test free.

“We cannot send patients home because they don’t have money; if we do so, we will be endangering the lives of other people, so we treat them free,” Okogbenin said.

He commended NCDC for its support, especially the training of health workers, and provision of logistics for handling of emergencies.

Lassa fever survivours also commended the efforts of the government towards the eradication of infectious diseases.

They also urged the government to reward health workers that have risked their lives in the fight against Lassa fever,

One of the survivours Aide Odion, told NAN that he was grateful to NCDC and Edo State Government for the support and enlightenment which gave him and his family members the opportunity to be alive.

“It started with my wife in December 2017, and she was discharged on Dec. 31 and on Jan. 13, my two kids got infected; I usually go to visit them and before I realised it, I contacted the disease.

“I am grateful that we all came out alive, because I saw with eyes how people died, although it cost me a lot of money.

“I spent about N450,000 to get four of us treated of the disease; I borrowed money; however, I was positive throughout the period because I always say that I will not die or lose any member of my family to the disease, and I thank God it happened that way,” Odion said.

Another survivours Ndubuisi Ojonike, an indigene of Enugu State, who resides in Auchi, appealed to the government to appreciate health workers as they risk their lives to save the lives of patients.

.Mr Tony Ekhayemhe who also survived the dreaded disease with his wife and son, said he now educates people on how to avoid Lassa fever.

With adequate funding, sustained sensitisation and enlightenment, the high incidence of Lassa fever disease will be greatly reduced.(NANFeatures)