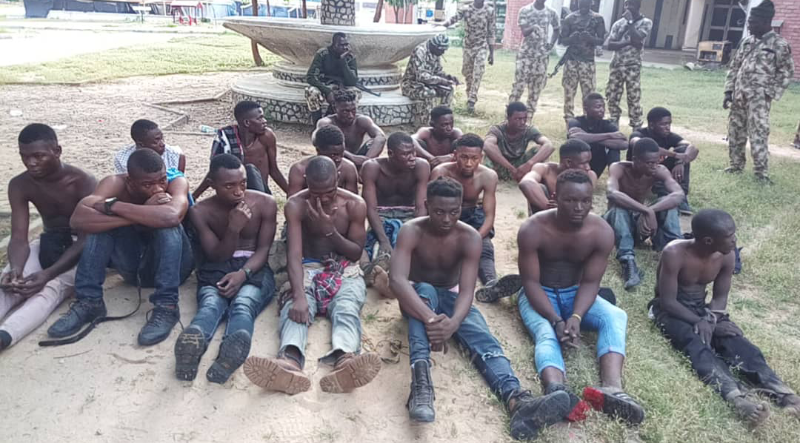 18 Members of a Notorious Cult Gang Arrested in Maiduguri

Following credible information received from well meaning individuals, a gang of suspected cultists, who are suspected to engage in armed robbery and kidnapping in Maiduguri and environs were arrested today Sunday 22 September, 2019 by troops of the Nigerian Army Super Camp 1 Molai, in line with the Super Camp Concept of the Counter terrorism efforts Of Operation LAFIYA DOLE (OPLD). The feat was achieved in conjunction with other security agencies

The alleged cultists were about to perform an initiation rite on some new members into their confraternity, when the Army troops and other security personnel stormed their hideout in Maiduguri. The cultists attempt to flee and escape arrest was unsuccessful as they were effectively overwhelmed and rounded up by the troops in conjunction with other security agencies.

The general area was cordoned off and 18 members of the cult group, comprising civilians and alleged students of the University of Maiduguri were arrested at the initiation scene. Three serving personnel of the Nigerian Army were also arrested. Those arrested were all handed over to the Nigeria Police Force Borno State (Maiduguri) Command for further investigation/necessary action.

While the arrested soldiers were immediately interrogated and tried in line with military justice system by 7 Division Military Police, in conjunction with their Units. Consequently, the soldiers were dismissed and handed over to the Borno State Police Command for further action.

Intensive joint patrol by troops of OPLD, and other security agencies has been intensified within Maiduguri Metropolitan Council and it’s environs.

While we continue to intensify the fight against insurgents and other criminals, members of the general public are once again enjoined to continue to support the security agencies with information that could assist in dealing with the criminals.

The Theatre Command OPLD also appeals to the public to be on the watch out for fleeing terrorists from the Lake Chad area.