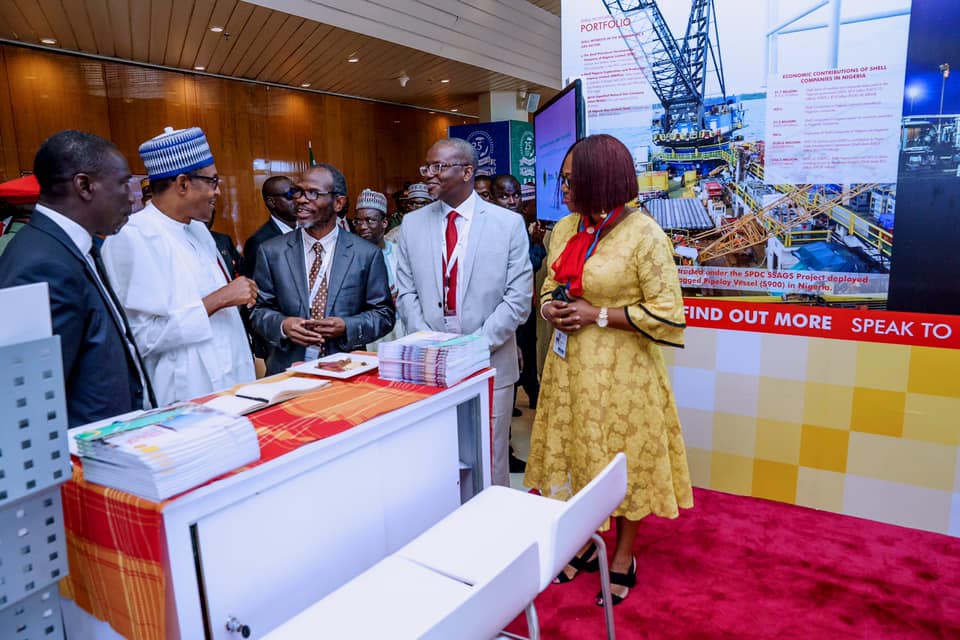 President Buhari also pledged that his administration will continue to collaborate with the private sector in designing and implementing developmental projects that will keep Nigeria on track for sustained, inclusive and prosperity driven growth.

In his speech at the opening of the 2-day Summit, the President said the successful conclusion of 2019 general elections and the resort by aggrieved candidates to seek redress in the courts rather than the street was proof that Nigeria‘s ‘‘democracy is maturing.’’

‘‘I am informed that this year’s Summit has identified key job-creating sectors such as agriculture, manufacturing, ICT, creative industry and the extractive industry as focus sectors.

‘‘I am also told that your deliberations will focus on unlocking capital through our financial services sector to actualize the opportunities in these sectors.

‘‘In your deliberations, I would request that your proposals are productive, inventive and innovative keeping in mind that Nigeria’s unique challenges can only be solved by made in Nigeria solutions,’’ he said.

Recounting the 2019 general elections, the President said Nigeria has shown the world that it is capable of electing leaders in a peaceful and orderly manner.

‘‘The elections have come and gone. Our country, once again, has shown the world that we can choose our leaders in a peaceful and orderly manner.

‘‘Apart from a few pockets of unrest, the majority of voters exercised their civic rights without hindrance.

‘‘Furthermore, we also saw an increase in the number of aggrieved candidates, and supporters, who took their concerns and grievances to the courts as opposed to the streets. This is how it should be.

‘‘Ladies and Gentlemen, what this clearly shows is that our democracy is maturing,” he said.

Reflecting on the manifesto of the All Progressives Congress (APC) party, the President noted that his administration’s economic policies in the last four years focused on the need to uplift the poor and the disadvantaged and encourage inclusivity.

‘‘During the elections, almost all candidates proposed their vision for the economy and for the country.

‘‘Our party, the APC, put before the country policies that focus on delivering prosperity to all Nigerians through enhancing security; eliminating corrupt practices in public service; supporting sectors that will create jobs, and promoting socially-focused interventions to support the poorest and most vulnerable among us.

‘‘These areas are all interconnected and are equally important in creating a prosperous society for all,’’ he said.

Underscoring the importance of collective prosperity, President Buhari asserted that a prosperous society is one where the majority of its citizens have an acceptable standard of living.

‘‘Today, many mistake prosperity with wealth. They are not necessarily the same.

‘‘Experts and analysts explain economic trends by making references to indicators of wealth.

‘‘Wealth, however, in its simplistic form, is money or other assets. In recent years, global events have shown that when a society and its leaders are driven and motivated by these alone, the ultimate outcome is a divided state of severe inequalities.

‘‘But a prosperous society is one where the majority of its citizens have an acceptable standard of living and a decent quality of life,’’ he said.

The President also used the occasion to affirm that in addressing population growth, security and corruption matters in developing economies, policies and programs must focus on promoting inclusivity and collective prosperity.

‘‘Nigeria is a country with close to 200 million people living in 36 states and the FCT.

‘‘A significant proportion of Nigeria’s prosperity today is concentrated in the hands of a few people living primarily in 4 or 5 states and the FCT. Some of the most prosperous Nigerians are here in this room.

‘‘This leaves the remaining 31 States with close to 150 million people in a state of expectancy and hope for better opportunity to thrive. This, in the most basic form, drives the migratory and security trends we are seeing today both in Nigeria and across the region.

‘‘In the recent weeks, I have been to the Niger Republic to attend the ECOWAS summit; Japan with fellow African leaders to attend the Tokyo International Conference on African Development; the United Nations General Assembly in New York and South Africa on a State visit to exchange ideas on the common themes we share as the two largest economies in Africa.

‘‘What was very clear at these meetings, and numerous others I have been privileged to attend over the years is the increased consensus by leaders that to address population growth, security and corruption matters in developing economies, our policies and programs must focus on promoting inclusivity and collective prosperity.

‘‘This shift implies that the concept of having competitive free markets that focus on wealth creation alone will be replaced by those that propagate the creation of inclusive markets which provide citizens with opportunities that will lead to peaceful and prosperous lives,’’ he said.

On the focus of this year’s economic summit which is discussing what Nigeria would be in the year 2050 when many studies estimate the country’s population will rise to over 400 million people, the President said:

‘‘As a government, our view is to equip our citizens with the means to seize any opportunities that may arise.

‘‘This means we continue investments in education, health care, infrastructure, security and strengthen and entrench the rule of law.’’

While wishing the 25th NES fruitful, robust and productive deliberations, the President praised the organizers and stakeholders of the Summit for sustaining the platform established since 1993 to deliberate on key issues on national development.