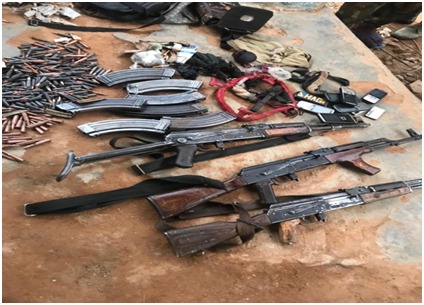 As Nigerian Army continues to heighten the tempo of her operational activities against bandits, insurgents and other criminal elements nationwide, the gallant troops of Operation LAFIYA DOLE have stepped up artillery bombardment of identified Boko Haram criminals’ enclaves and hideouts. Troops have equally stepped up the effective blockade of their logistics supply routes and the arrest of some of their key logistics suppliers with devastating outcomes on the criminal insurgent group. For instance, during a successful sting operation conducted on 9 October 2019 by troops of the 26Task Force Brigade, 10 suspected key Boko Haram members were reportedly captured while attempting to sneak into some communities around Bitta in Gwoza LGA of Borno State in a bid to escape the troops’ sustained onslaught against them. Preliminary investigation reveals that the arrested criminals are ranked higher than the Amir in the criminals’ hierarchy. Many of them have been identified to have operated combat vehicles during the infamous Boko Haram attack on Gwoza in 2014.The arrested suspects include Shettima Mustapha Umar, Abba Buji, Alhaji Bukar Madu-(KAHID – a Boko Haram Terrorists’ equivalent of a Brigadier General), Ali Hassan (Boko Haram Terrorist Imam), Alkali Laminu, Bukur Mustapha, Buba Umaru (Alias Black Uhuru) also a KAHID, Madu Nosobe, Mustapha Hussaine and Umar Jeddum all from Bama LGA of Borno State. It is gratifying to note that one of the arrested suspects, Alhaji Bukar Modu is Serial 89 on the high profile Boko Haram leaders wanted list published by the authorities of the Nigerian Army.

Similarly, in 1 Division Area of Responsibility, troops of 1 Division Garrison Tactical Headquarters responded to a reported cattle rustling incident. Acting on reliable information from the locals, the troops intercepted the suspected criminals along with the rustled animals while attempting to cross Polewire Labi, a community in Birnin Gwari LGA of Kaduna State. On sighting the approaching troops however, the criminal bandits abandoned the 23 rustled cows and fled into the forest. Consequently, the animals were recovered by the troops while efforts are on to identify their owners for eventual release to them. Furthermore, in a joint operation conducted by the troops of 3 Brigade in conjunction with the personnel of the Nigeria Police Birniwa Command in Jigawa State, 5 herdsmen complicit in the gruesome murder of one Mallam Haliru Yahaya in his farm were arrested. The arrested suspects are currently in the custody of the Nigeria Police Birniwa Command while troops maintain vigilance in the area to forestall any escalation.

In another development, troops of 4 Brigade operating under the aegis of operation MESA smashed a notorious armed robbery gang that have been terrorizing commuters along a major road at Owa Community in Uhunmwaede LGA of Edo State. One of the suspects, Mr Evans Obidili Ubaka was promptly arrested while other gang members fled. However, concerted efforts are on to track and arrest the fleeing criminals. Also, on same day, the troops conducted a joint operation with personnel of the Nigeria Police Oredo Command. Acting on credible information, the operation led to the arrest of a renowned kidnappers’ informant popularly known as “Mr Jaguar”. Preliminary investigation reveals that the suspect master minded the recent infamous kidnap of a man, his pregnant wife and child in the area.

In a similar vein, troops of 32 Artillery Brigade’s Anti-Kidnapping Team conducted a security investigation mission to Ajowa- Akoko village in Akoko North West LGA of Ondo State. The troops met with one Alhaji Zakari Yau, a kidnap victim who escaped from his abductors after spending 2 days in captivity. Information gathered during the mission led to the arrest of one of the suspects named Wasiu Mohammed and 3 other members of the gang. During preliminary investigations, the suspects confessed to the kidnapping of the victim and the demand for a ransom of Five Million Naira (#5,000.000.00) only. Cordon and Search of the kidnappers’ hideout resulted in the recovery of 4 machetes, one TECNO mobile phone, 2 First Bank ATM cards, one voters card and one ID card belonging to one Mr Moses Michael Jackson. Also recovered was the GSM phone used by the prime suspect Wasiu Mohammed. In a related operation conducted by same troops in the same area, another member of a notorious 5 man kidnap gang, 21 year old Jimoh Umar was also arrested and handed over to the DSS Ondo State Command.

Additionally, in 9 Brigade Area of Responsibility, timely intervention by troops averted a heinous attack on personnel and equipment of the Nigeria Customs Service Idiroko Command by some miscreants opposed to the border closure directed by the Federal Government of Nigeria. In the same vein, troops arrested a murder suspect, one Luck Pam, at Rawairu Village in Barkin Ladi LGA of Plateau State. The suspect confessed to the murder of a herdsman on 5 October 2019.

In the light of the above, the Chief of Army Staff, Lt Gen Tukur Yusuf Buratai wishes to thank all patriotic citizens for availing the Nigerian Army with useful information leading to the successes so far recorded. He also congratulates the troops for the unprecedented successes in the arrest of the 10 Boko Haram criminals while admonishing them to keep the pressure on the insurgents and their collaborators.