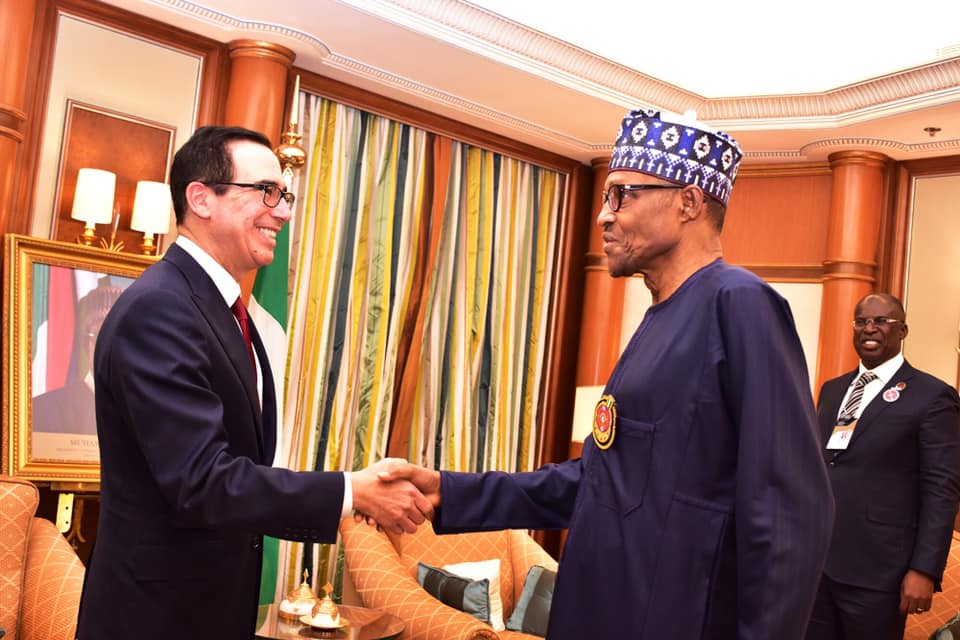 President Muhammadu Buhari has expressed the willingness of the Nigerian government to mobilize additional capital from development finance institutions for the upgrade of critical infrastructure in the country.

The President met with U.S Treasury Secretary, Steven Mnuchin in Riyadh on Wednesday and they had positive discussions on investments in Nigeria under the new United States International Development Finance Corporation (USIDFC), which provides $60 billion for investments in developing nations.

Speaking at the meeting held on the margins of the Future Investment Initiative (FII) forum, President Buhari said Nigeria will leverage on the U.S facility to address current challenges confronting her power sector as well as general upgrade of infrastructure.

The President and Mnuchin also discussed areas of strengthening Nigeria’s ongoing collaboration with the United States on stopping terrorist financing.

Mnuchin was accompanied by Brent Macintosh, Under Secretary of the Treasury for International Affairs and Marshall Billingslea, Assistant Secretary for Terrorist Financing in the United States Treasury Department.

The Treasury Secretary used the occasion to introduce Macintosh who was recently promoted Under Secretary for International Affairs by President Trump after the previous Under Secretary, David Malpass, was elected President of the World Bank.

The Nigerian leader congratulated Macintosh on his elevation and requested for his continued support to Nigeria especially in accessing the $60 billion infrastructure fund under the USIDFC.