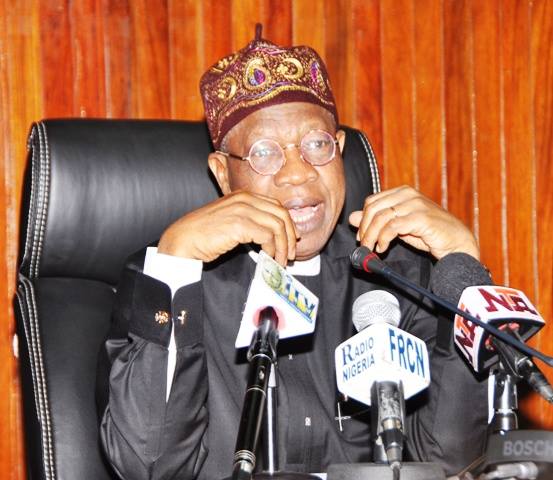 The Federal Government says it has commenced the process of injecting sanity into the Social Media space to prevent it from setting the nation on fire.

The Minister of Information and Culture, Alhaji Lai Mohammed disclosed this in an interview with the News Agency of Nigeria (NAN) on Tuesday in Abuja.

“As a matter of fact, we have already put in motion the machinery for this.

“We have written letters to the major stakeholders who would nominate representatives and we are going to sit down together to decide on how best to confront this menace,’’ he said.

The minister noted that the government had the responsibility to keep the country together, therefore, social media would not be left alone to destabilise the nation.

He said the government welcomed the debate that had followed the decision and announcement to sanitise the social media space and the airwaves.

“We are glad about the criticism because what we set out to achieve is to bring the matter to the front burner of discourse.

“We are not under any illusion that the people will take this hook line and sinker.

“We are, however, glad that there are more people who believed that the social media poses imminent danger to the unity of Nigeri, especially as they have become merchants of fake news and hate speech,” he said.

The minister noted that those who had opposed the regulation of social media had not denied the fact that the platform was being used by purveyors of fake news and hate speech with grave consequences.

“Their concern largely, which is unfounded is that it might lead to the stifling of the freedom of the press or gaggling the media.

“However, we want to make it clear that it is not our intention to do this.

“The only people who are afraid of the decision to sanitise the social media and the airwaves are the purveyors of hate speech and fake news.

Mohammed expressed concern that the Nigeria Union of Journalists (NUJ) and other media professional bodies, that were supposed to support the regulation were kicking against it.

“This is amusing because they should be glad as they are the one we are protecting.

“The honest truth is that the established, well trained professional journalists do not indulge in fake news and hate speech because they have regulatory bodies already.

“The NUJ has regulatory body and Code of Conduct and they are largely not the one responsible for the dissemination of fake news and hate speech.

“I am therefore, really surprised that such criticism is coming from them because they are the people we are protecting and they are the ones that will benefit the more from the government action,’’ he said.

The minister reiterated that no amount of criticism and opposition would stop regulation of the social media and the airwaves.

“We heard all kinds of threat, some even went as far as calling for the removal of the minister.

“Let me assure them that the minister is not perturbed by this and we are focused.

“No amount of intimidation, sponsored articles in any form is going to stop us from regulating social media.

“This is not just a menace to the government, many people have committed suicide because their reputation has been destroyed by the social media,’’ he said.

The minister reiterated that the government would neither gag the media nor stifle the freedom of speech in regulating the media platforms.

On the regulation of the media waves, Mohammed said he would receive recommendations on the implementation process in a few days from the committee he recently inaugurated.

He said they had also received a lot of attacks from some critics that the intention was nothing but an attempt to gag the media and stifle free speech.

“Again, our answer to this is simple. Under our watch, hate speech will not become free speech.

“Let me say once again that only those who are purveyors of fake news and hate speech have things to fear from these recommendations,’’ he said.

According to the minister, the regulation of both the social media and the airwaves is in the national interest. (NAN)