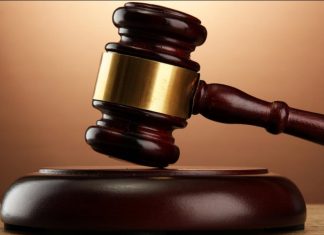 The Enugu Zonal office of the Economic and Financial Crimes Commission has arraigned a lawyer, Nwabufo Richard Obienu and his company, Forric Nigeria Limited before Justice B.G Diepri of a Rivers State High Court, Port-Harcourt on a three-count charge bordering on conspiracy to commit felony and stealing by conversion to the tune of N200,000,000.00 ( Two Hundred Million Naira only).

One of the charges reads, “that you, Barrister Nwabufor Richard Obienu while being Managing Director of African Pioneer Company Limited, sometime in the year 2010 at Port Harcourt within the jurisdiction of the Hih Court of Rivers State, with intent to defraud, fraudulently converted to your personal use the sum of N68.871.197.57 ( Sixty Eight Million, Eight Hundred and Seventy-one Thousand, One Hundred and Ninety-Seven Naira, Fifty Seven Kobo ) out of the N200,00,000.00 ( Two Hundred Million Naira) being property of African Pioneer Company Limited paid to her as compensation and thereby committed an offence”.

The offence is contrary to Section 388 of the Criminal code Law, CAP 37 Vol.II Laws of Rivers State of Nigeria 1999 and punishable under Section 390(9) of the same Law.

The defendant pleaded “not guilty” when the charges were read to him. In view of his plea, the defence counsel, Ifeoma Adara moved a motion that her client is granted bail on liberal terms because he had recently undergone brain surgery.

The defendant was granted bail in the sum of N100, 000, 000.00(One Hundred Million Naira) and a surety in like sum. The surety is to swear to an affidavit of means and must also deposit four passport photographs with the court.

The defendant was remanded in EFCC custody for three days, pending the perfection of his bail terms.