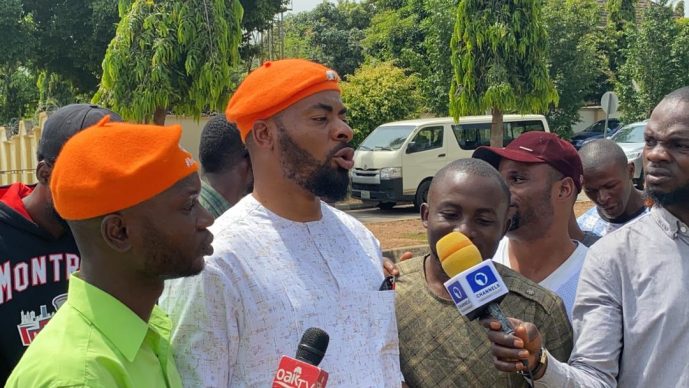 Protest at DSS Headquarters is “breach of national security” – CSOs

Civil Society Organisations (CSOs) have urged individuals and group to desist from protesting at the Headquarters of Department of State Services (DSS) to avoid breach of national security.

The call was made in a statement issued on Friday by Guardians of Democracy and Development (GODD), Tiv Youth Council (TYC) Worldwide, Empowerment for Unemployed Youth Initiative (EUYI) and nine other groups.

Sowore was detained on charges of treasonable felony and money laundering after he organized a revolution campaign against the administration of President Muhammadu Buhari.

“This act is nothing but an open call to anarchy, anomie and uncontrollable insurrection in blatant breach of national security.

“We herein use this medium to draw the attention of the band of protesters that even though they are highly sympathetic to the cause of Mr Omoyele Sowore, they should be well informed that they have the courts to lawfully and peacefully channel whatever grievances they have.

“The resort to protest and surreptitious attempts to breach the security at the DSS headquarters Abuja is totally unwelcome.

“The action of these protesters lends credence to that fact that the revolution protest has not been laid to rest considering the fact that it was held at the principal security forte of the three Arms zone.

“It is a known convention globally that protests are not to be taken to the vicinity of National Security Intelligence Agencies; the protest therefore stands to be condemned by all well-meaning Nigerians and true Democrats who seek the development of our dear nation Nigeria,” the CSO leaders said in the statement.

The CSOs further urged Nigerian youth to distance themselves from being used as cannon fodder to trigger new breed of unbridled security challenges.

They also urged Nigerians to redirect their energies towards intellectual and innovative revolution of inventive ideas that can create new industries and wealth in the process rather than being misled.

“It should be noted that there are also Civil Society Groups that are deeply sympathetic to National Security and in the event that these groups embark on a counter protest in support of DSS, the office will become a field of protests and counter protest while security is disrupted.

“We call on the DSS to strengthen prompt surveillance around its vicinity to the extent that any individual seen loitering around with no cogent mission should be immediately arrested and prosecuted.

“We cannot fold our arms and watch while certain unpatriotic elements will hide behind advocating for human rights to foment new strain of security challenges.

“Nigeria is ours to build and all hands must be on deck in this respect.” (NAN)