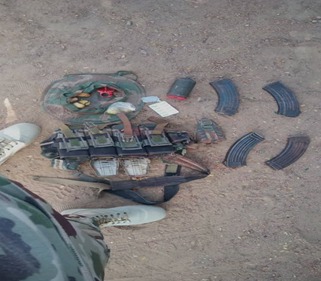 Onslaught Against Boko Haram/ISWAP in the North-East

As troops of Operation LAFIYA DOLE continue to exert their superiority against remnants of Boko Haram/Islamic State West Africa Province elements, troops of 121 Battalion deployed at Pulka in Gwoza LGA of Borno State in conjunction with elements of Civilian Joint Task Force (CJTF) today the 26 November 2019 conducted a fighting patrol along the Mararaba Junction – Kirawa road in the same LGA. During the patrol, troops came in contact with some Boko Haram logistics elements at Sabon Gari, a known Boko Haram criminals’ crossing point into Sambisa Forest. Troops instinctively responded and neutralized 3 of the Boko Haram criminals’ logistics couriers while others escaped into the forest. Items captured in the aftermath of the encounter include 81 rounds of 7.62mm Special ammunition, food items and 7 bicycles belonging to the criminals.

In another display of courage, bravery and professionalism, troops of 29 Task Force Brigade of Operation LAFIYA DOLE deployed at Borgozo in Kaga LGA of Borno State overwhelmed some marauding Boko Haram criminals. The criminal Boko Haram elements who had dared the lethality of the troops with an uncoordinated attack on the troops’ location on 21 November 2019 were overwhelmed by own troops. At the end of the brief encounter, 3 Boko Haram criminals were neutralised while several others escaped with gunshot wounds as evidenced by the traces of blood discovered along their escape route. Additionally, one AK 47 Rifle, 7 AK 47 Rifle magazines, 86 rounds of 7.62mm Special ammunition, 300 rounds of 7.62mm NATO ammunition, 3 camel bags and one black Boko Haram flag were recovered by the troops in the aftermath of the encounter.

Regrettably, one officer and 2 soldiers were wounded in action. The wounded personnel are in stable condition and responding to treatment in a military medical facility.

In a similar encounter, troops of 21 Special Armoured Brigade deployed at Banki Junction in Bama LGA, Borno State while responding to a Boko Haram attempted attack on their location on 21 November 2019, neutralized one Boko Haram criminal and captured 2 AK 47 Rifles and 60 rounds of 7.62mm Special ammunition.

Relatedly, on 22 November 2019, troops of 25 Task Force Brigade deployed at Damboa in Damboa LGA of Borno State swiftly responded to a distress call by some residents of Grijan Village along Damboa – Chibok road. The Boko Haram criminals who were sighted massing up to attack the Village were pursued by troops. During the pursuit, 2 Boko Haram criminals were neutralized and 4 AK 47 Rifle magazines, 32 rounds of 7.62mm Special ammunition, one bandolier, one military jungle hat and one locally made bomb were captured from the insurgents.

Similarly, on 22 November 2019, troops of 26 Task Force Brigade deployed at Pulka in Bama LGA of Borno State sprung a successful ambush at a known Boko Haram criminals’ crossing point along Banki Junction – Pulka road. During the ambush, 3 Boko Haram criminals believed to be logistics suppliers were neutralised while conveying various food items to the desperate insurgents in Sambisa Forest.

In yet another development, troops of 152 Battalion deployed at Firgi in Bama LGA of Borno State arrested a suspected Boko Haram member at a Check Point. The suspect was apprehended in possession of one empty case of Anti-Aircraft Gun ammunition (used for making suicide vest), one tap head and some electronic devices for making explosive devices.

Mindful of the possible spike in criminalities during the yuletide season, troops of Nigerian Army have stepped up operations against criminal elements across other States of the nation through the reenergized Operation MESA, Exercises ATILOGWU UDO I, AYEM AKPATUMA II, and CROCODILE SMILE IV to further strangulate and deny criminals elements freedom of action. Multiple successes have been recorded. In the South-East Region, Operation ATILOGWU UDO I continue to smash criminal syndicates across the region. Specifically, on 17 November 2019, troops Uwani LGA of Enugu State responded swiftly to a distress call regarding a car snatching incidence at Barracks Road, Nsukka. After a hot chase, the gallant troops recovered the snatched Mercedes Benz vehicle with Registration Number KADUNA BF 930 DKA and arrested the suspect, one Ona Ikechukwu. Keys of different car models and assorted charms were also recovered from the suspect. In a related incidence, on 19 November 2019 troops of 24 Survey Engineer Regiment acting on credible ùùinformation successfully smashed an armed robbery syndicate terrorizing Ezza South LGA of Ebonyi State. The arrested suspects are Success George, Noble Mbam, Emeka Ugo, Aja Anayochukwu and Imeze Joseph (buyer of stolen goods). Additionally, one stolen Plasma Television was recovered from the suspects. Also, on 20 November 2019, troops of 302 Artillery Regiment and 14 Field Engineer Regiment in conjunction with other security agencies busted a notorious criminal gang at Nnewi Town in Nnewi North LGA of Anambra State. During the sting operation, 20 suspected criminals were arrested including one Nwosu Izuchukwu, a notorious Methamphetamine drug dealer.

Relatedly, on 17 Novem ber 2019, troops of 144 Battalion, acting on credible information, arrested a notorious car snatcher, one Iyaba Wilfred while attempting to steal a Toyota Camry saloon car during a Church Service at Living Word Ministries Church in Aba South LGA of Abia State. Items found on the suspect include a master key and other tools for gaining access to vehicles. Furthermore, on 17 November 2019, troops of Sector 2, received information about an on-going armed robbery operation at Ukpokeri Village in Isialangwa North LGA of Abia State. Subsequently, the troops robustly mobilized to the scene and arrested one of the robbery suspects, Chinecherem Abnegwu. The suspect confessed that he and one Chisom (now at large) ha been in the heinous act for 2 years.

In another development, on 22 November 2019, troops of Sector 5, in conjunction with other security agencies conducted a successful joint patrol and arrested 4 members of a notorious kidnap gang at Ihuonyia, Ezeagu LGA of Enugu State. Preliminary investigation reveals that the suspects, Amujiugu Chinedu, Lawal Jibril, Mohammed Ibrahim and Samaila Ila Ibrahim were involved in the kidnapping of one Reverend Father Nduluo Theophilus of St Patrick Church Ihuonyia Ezeagu on 15 November 2019.

In Operation MESA, troops continue to smash criminal elements across the Theatre of operation. On 19 November 2019, troops of 1 Division Garrison deployed at Gwagwada in Chikun LGA of Kaduna State, acting on reliable information, arrived Kajari Village in the same LGA and neutralized one of the bandits operating in the area and recovered one AK 47 rifle and 3 rounds of 7.62 mm Special ammunition. In a related development, on 20 November 2019, acting on credible information, troops of 223 Battalion arrested 2 kidnap suspects namely Zoodi Babangida Joshua and Achie Shehu in connection with a kidnap incidence around Ayu and Mugaba Village of Danko Wasagu LGA of Kebbi State. Also, troops of Operation MESA deployed at Jos North LGA of Plateau State, following a lead on 21 November 2019, arrested one Jonathan David at Rock Haven area in Jos North LGA of Plateau State with a fabricated pistol and one live cartridge in his possession. Equally, on 22 November 2019, troops of Operation MESA deployed at Ugya in Toto LGA of Nasarawa State encountered some bandits at Turunku Village. After the brief encounter, one bandit was neutralized while 2 others were arrested. One locally made gun and 2 cutlasses were recovered from the criminals.

The Chief of Army Staff, Lieutenant General Tukur Yusufu Buratai wishes to thank all peace loving citizens for their continued support and goodwill as the troops of the Nigerian Army continue to create a peaceful and conducive environment before, during and after the Yuletide period.