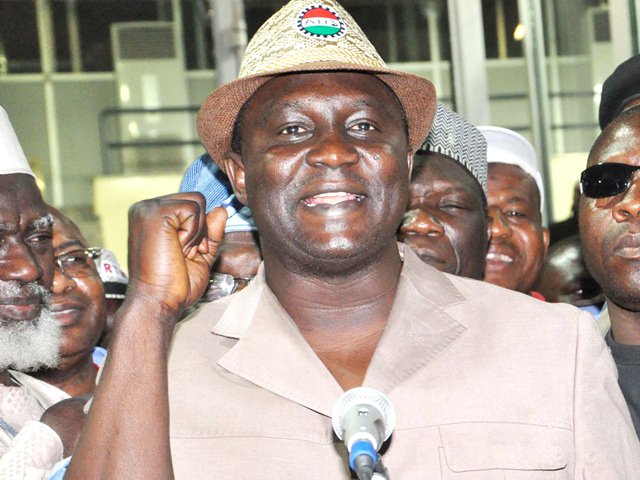 States must stick to the minimum wage -NLC

The leadership of the Nigeria Labour Congress (NLC), has reiterated that the National Minimum Wage law is binding to all and that state governors have no right to pay below N30,000.NLC President, Dr Ayuba Wabba, said this at a one-day review meeting on the New National Minimum Wage with state council chairmen. He stressed the need for state governors to ensure the speedy conclusion of negotiations on the implementation of the new wage Act. Wabba said since the President signed the New Minimum Wage Act to law, every state governor was bound to respect the new wage structure and negotiate with labour to decide what the consequential increase should be.“All of us are aware that from the day the president signed the minimum wage bill into law it becomes enforceable.“It can be enforced through a court of law, and certainly, there is no excuse for any state to say that it is not going to respect a law that is actually based on the constitution.“The national minimum wage is actually a constitutional issue, so clearly, it is about respecting our laws and also respecting  international convention and procedures.“But importantly, it is to respect the principles of Tripatism, social dialogue in addressing industrial relation issues.“So clearly, you can see that we are providing this guide so that we can also play our role effectively as National Labour Congress, as workers’ organisation, to be able to see that there is seamless implementation.“Where there are challenges we are also ready to intervene in this thing.“I’m not aware of any governor that will say he will not respect any provision of the constitution of the Federal Republic of Nigeria or an Act of parliament that was signed by the President.“I have not heard of any such intune that any governor said he will not respect the law.“What I heard is that N30,000 is already a law and that will be the basis; you can pay higher but you cant pay below N30,000. That is what the law provides.“This is where we are and what we are doing to take stock to find out the situation of where every state is, and local governments, in terms of the implementation process.”The Minister of Labour and Employment, Dr Chris Ngige, while briefing State House correspondents said the  Federal Government had given Dec. 31, as the deadline for payment of arrears on consequential adjustments of the National Minimum Wage. Ngige said that the Council also approved the payment of all outstanding financial implications of the consequential adjustments as worked out by the National Salaries, Income and Wages Commission, beginning from April 18.“Council today approved for us that the financial implications be worked out by the National Salaries, Income and Wages Commission, as consequential adjustments should take effect from April 18, the date the new national minimum wage came into being.“The Council also approved for us that the financial implications be worked out and the attendant payments completed on or before Dec. 31.“Council further directed that the Minister of Finance, Budget and National Planning, through the Office of the Accountant-General of the Federation, should affect all these payments as scheduled before Dec. 31,” Ngige said.