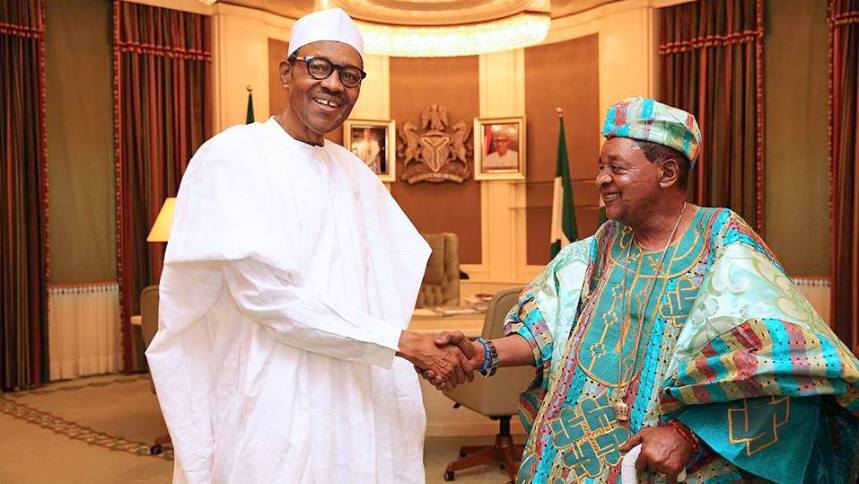 President Muhammadu Buhari has solicited the support and understanding of traditional rulers in Oyo State to move the nation to the next level.

He made call during an interactive session with the traditional rulers at the House of Chiefs Secretariat in Ibadan on Saturday.

The News Agency of Nigerian(NAN) reports that the President was received at the session by traditional rulers in the state led by the Alaafin of Oyo, Oba Lamidi Adeyemi.

“I am here to thank you for the support I have enjoyed from you all. In all my attempts to become president, I visited the 774 local governments in Nigeria and sought their understanding.

“I am here to remind you to reflect on the condition we met the country, where we are today and what we have achieved,” he said.

Buhari said that the Peoples Democratic Party in its 16 years at the helm of affairs in the country did little or no infrastructure.

“You can see the effort we have made so far. We brought the roads and railways back to work. The PDP claimed they have spent $16 billion on power without any meaningful input.

“Today, we have improved power and increased power to 7,000 megawatt. We have laid solid foundation that needs to be consolidated,” he said.

Buhari said that it was when everything was working that Nigerians could be less bothered about those in government.

He also called on them to support the administration’s anti-corruption crusade, saying they would not relent in taking the nation to greater heights.

In his remarks, Gov. Abiola Ajimobi of Oyo State said that the President had insisted on paying homage to the traditional rulers before the campaign.

“This act has shown the respect the President has for traditional institutions. I am proud that the 103 traditional rulers in this state are here to receive him,” he said.

Ajimobi said that the people of the state would continue to support Buhari and the APC administration in the country.

Alaafin of Oyo, Oba Lamidi Adeyemi, appreciated the President for his usual respect for traditional institutions.

Adeyemi, who spoke on behalf of the Obas, said it was the first time a sitting President would visit traditional rulers at the house of chiefs.

He described the President as a man of integrity and probity, who could not be bribed.

“Mr President, I recognise some of our wonderful governor in our midst. Let me tell you that Ajimobi has done very well in Oyo State.

“He has returned Oyo from a garrison to a peaceful state. He has transformed the state and built solid infrastructure.

“Mr President, I suggest you work closely with Ajimobi toward achieving the Nigeria of our dream. He can also be your Senate President,” he said.

NAN reports that the President was accompanied by Vice President Yemi Osinbajo, Gov. Akinwunmi Ambode of Lagos, Gov. Kayode Fayemi of Ekiti and Mr Adebayo Shittu, the Minister of Communications.(NAN)