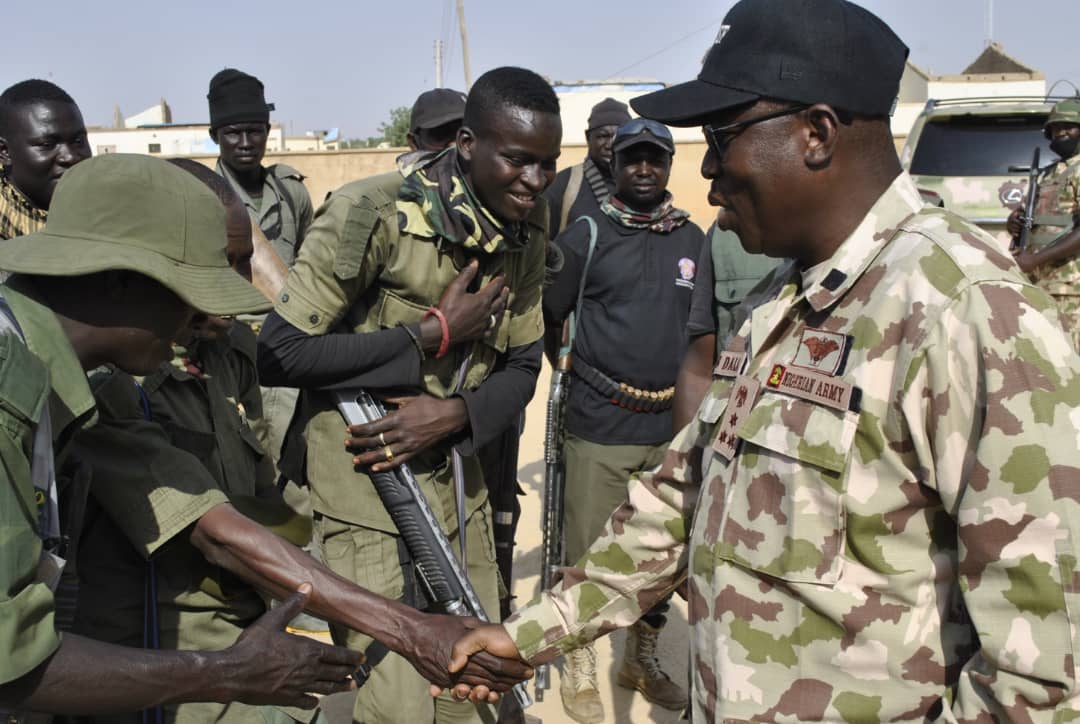 Troops of 159 Battalion deployed in Sector 2 of Operation LAFIYA DOLE in Geidam , Yobe state, have been lauded for their display of gallantry at containing Boko Haram Terrorists (BHT), who infiltrated the serene town of Geidam on Wednesday, 23rd January 2019, at about 5:30pm, shooting sporadically, thereby creating panic and causing unnecessary apprehension. The Acting Commander Sector 2, Operation LAFIYA DOLE, Brigadier General Mohammed Dala, gave the commendation today, during an on the spot assessment visit to Geidam. He commended the troops for their gallantry and deliberate effort in protecting the civil populace in the town, particularly at the Geidam market. He directed the immediate replenishment of the troops’ supplies, assuring them that issues of their welfare will always be a top priority.

The BHTs who came to loot foodstuffs and other items, took advantage of the market day in Geidam to infiltrate the town and attacked the military base. The troops displayed a high sense of professionalism by discretely engaging the terrorists with less sophisticated weapons in order to minimize collateral damage with the attendant civilian casualties. Sadly however, the troops, in the process suffered some casualties in vehicles, equipment and personnel.

The Sector Commander seized the opportunity to pay a visit to the Emir of Geidam and afterwards had a meeting with officials of other security agencies, where he sued for their cooperation and synergy in sharing timely information that would enhance the pro-activeness of troops. He further reassured them, that troops will continue to carry out aggressive patrols and offensives to deny Boko Haram and other criminal elements freedom of action.

He further urged the good people of Geidam and Yobe state in general, to go about their lawful businesses, as the troops are committed to the protection of lives and property, as well as working round the clock to forestall any attempt by groups or individuals to cause breakdown of law and order in the state. The Commander however warned, that anyone identified as a BHT collaborator will be arrested and made to face the full wrath of the law.