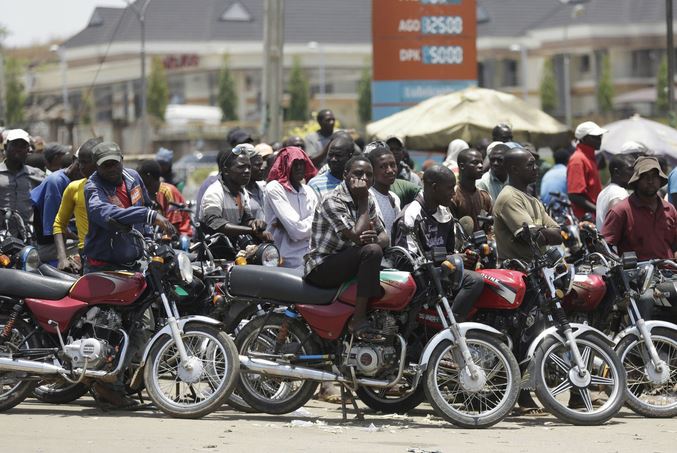 Some commercial motorcyclists, popularly called okada riders, on Saturday clashed with some policemen in Kubwa, a suburb of Abuja.

Eyewitnesses said trouble started at about 2.00 p.m. around Total Filling station, at 2.2 Junction, when an unidentified policeman, allegedly on illegal duty, hit the arm of one of the motorcycle riders with his baton, and supposedly causing a dislocation on the arm in the process.

According to one of the witnesses, Mr Daniel Ibe, the cry of the injured motorcyclist attracted the attention of his colleagues, who parked near the scene of the incident, prompting a show of solidarity.

“The policeman hit the motorcyclist with his stick because he refused to stop for the usual extortion, causing his bone to dislocate,” he said.

The commercial cyclists made a bonfire on the road, forcing motorists to retreat on getting to the spot.

Policemen drafted to the troubled spot may have added to the anxiety in the air, as they shot several bullets in the air, even as the cyclists remained obstinate.

Calm, however, returned to the spot when the Divisional Police Officer (DPO) of Kubwa Police Station came to personally appeal to the aggrieved motorcyclists.

The DPO invited them to his office for settlement, thereby dousing the tension and threat of violence. (NAN)

The DPO invited them to his office for settlement, thereby dousing the tension and threat of violence.