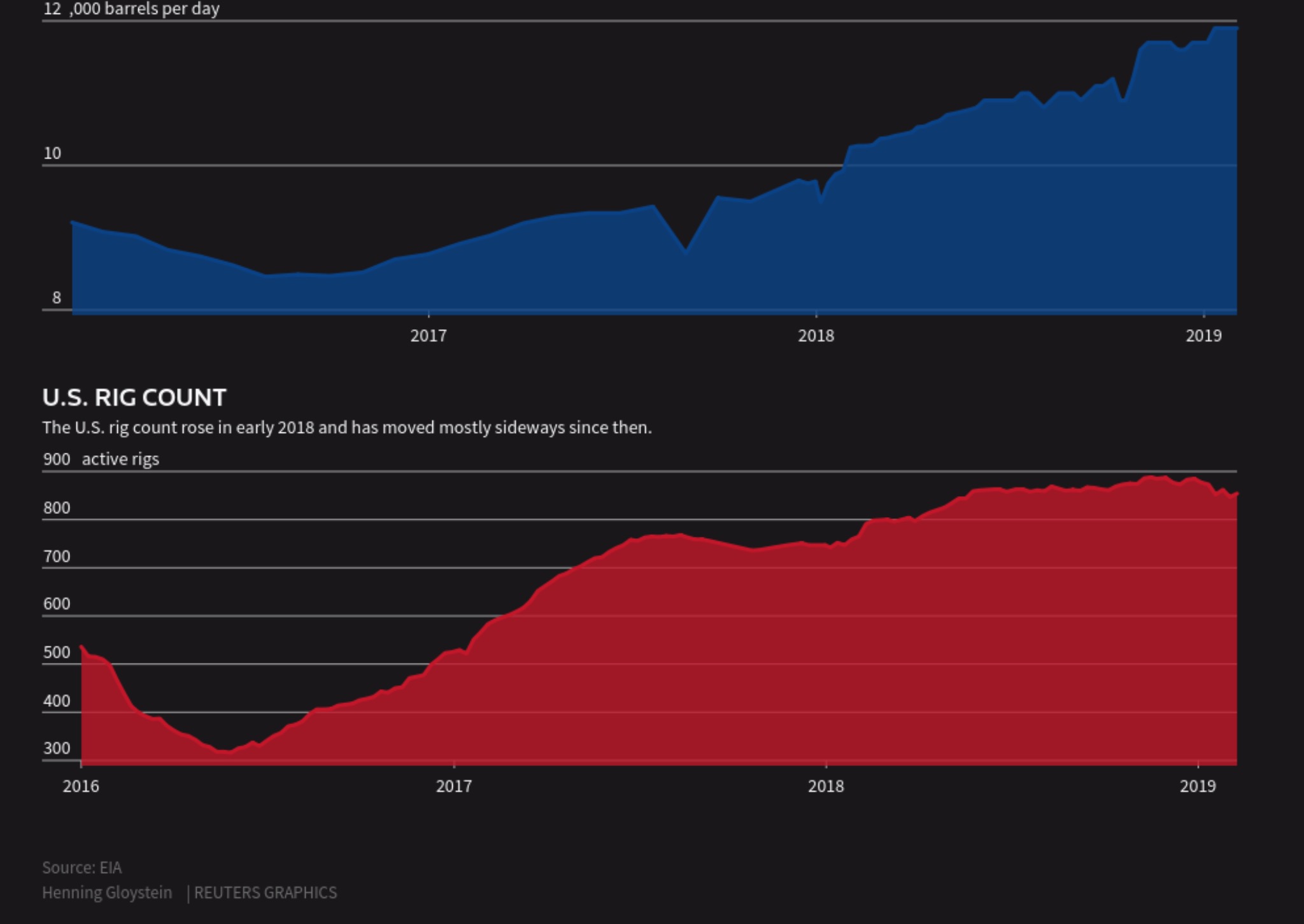 Oil prices fell by around 1 on Monday as drilling activity in the United States, the world’s largest oil producer, picked up and financial markets were pulled down by trade concerns.

A refinery fire in the U.S. state of Illinois, which resulted in the shutdown of a large crude distillation unit, that could cause crude demand to fall also weighed on prices, traders said.

In the United States, energy firms last week increased the number of oil rigs operating for the second time in three weeks, a weekly report by Baker Hughes said on Friday.

Companies added seven oil rigs in the week to Feb. 8, bringing the total count to 854, pointing to a further rise in U.S. crude production, which already stands at a record 11.9 million bpd.

WTI prices were also weighed down by the closure of a 120,000-barrels-per-day (bpd) crude distillation unit (CDU) at Phillips 66’s Wood River, Illinois, refinery following a fire on Sunday.

Elsewhere, the head of Russian oil giant Rosneft, Igor Sechin, has written to the Russian President Vladimir Putin saying Moscow’s deal with the Organization of the Petroleum Exporting Countries (OPEC) to withhold output is a strategic threat and plays into the hands of the United States.

The so-called OPEC+ deal has been in place since 2017, aimed at reining in a global supply overhang.

It has been extended several times and, under the latest deal, participants are cutting output by 1.2 million bpd until the end of June.

OPEC and its allies will meet on April 17 and 18 in Vienna to review the pact. Analysts said economic concerns were also weighing on crude oil futures.

Vandana Hari of Vanda Insights said in a note that crude prices were dragged down “as China returned from a week-long Lunar New Year holiday and regional stock markets plunged into the red amid resurgent concerns over the U.S.-China trade dispute.”

Trade talks between the Washington and Beijing resume this week with a delegation of U.S. officials traveling to China for the next round of negotiations.

The United States has threatened to increase tariffs already imposed on goods from China on March 1 if the trade talks do not produce an agreement.

“The issues in Venezuela continue to support prices. Reports are emerging that PDVSA is scrambling to secure new markets for its crude, after the U.S. placed additional sanctions on the country,” ANZ bank said on Monday. (Reuters/NAN)